For the first time, astronomers have directly imaged the formation and expansion of a fast-moving jet of material ejected when the powerful gravity of a supermassive black hole ripped apart a star that wandered too close to the cosmic monster.

The scientists tracked the event with radio and infrared telescopes, including the National Science Foundation's Very Long Baseline Array (VLBA), in a pair of colliding galaxies called Arp 299, nearly 150 million light-years from Earth. At the core of one of the galaxies, a black hole 20 million times more massive than the Sun shredded a star more than twice the Sun's mass, setting off a chain of events that revealed important details of the violent encounter. 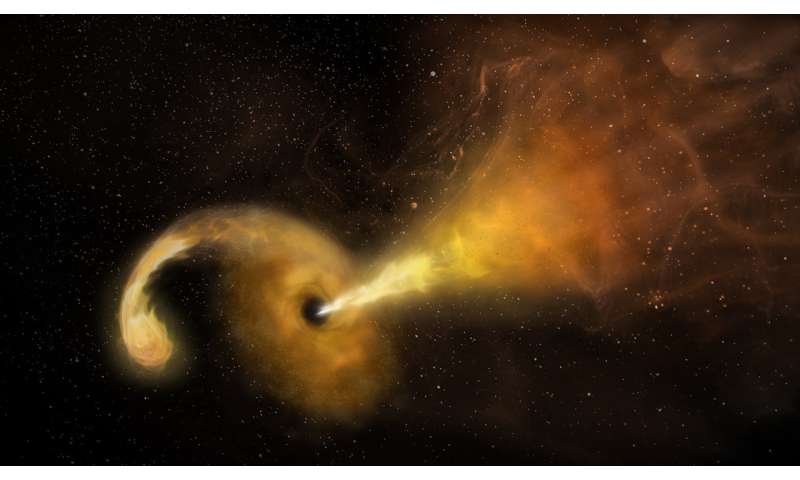 Artist conception of a tidal disruption event (TDE) that happens when a star passes fatally close to a supermassive black hole, which reacts by launching a relativistic jet.

Only a small number of such stellar deaths, called tidal disruption events, or TDEs, have been detected, although scientists have hypothesized that they may be a more common occurrence.

Theorists suggested that material pulled from the doomed star forms a rotating disk around the black hole, emitting intense X-rays and visible light, and also launches jets of material outward from the poles of the disk at nearly the speed of light.
_________________

A tidal disruption was detected using multiple orbiting observatories by the All-Sky Automated Survey for Supernovae (ASAS-SN) in Nov. 2014.

The event occurred in galaxy PGC 043234 about 290 million light years away from Earth. The disruption was caused by a star orbiting too close to the galaxy's black hole, and being caught in its tidal forces.
_________________

When a star wanders too close to a black hole, intense tidal forces rip the star apart. In these events, called “tidal disruptions,” some of the stellar debris is flung outward at high speed while the rest falls toward the black hole. This causes a distinct X-ray flare that can last for a few years.
_________________