An international team of astronomers has produced the first detailed images of the surface of a giant star outside our solar system, revealing a nearly circular, dust-free atmosphere with complex areas of moving material, known as convection cells or granules, according to a recent study.

The giant star, named π1Gruis, is one of the stars in the constellation Grus (Latin for the crane, a type of bird), which can be observed in the southern hemisphere. An evolved star in the last major phase of life, π1Gruis is 350 times larger than the Sun and resembles what our Sun will become at the end of its life in five billion years. Studying this star gives scientists insight about the future activity, characteristics and appearance of the Sun.

Convection, the transfer of heat due to the bulk movement of molecules within gases and liquids, plays a major role in astrophysical processes, such as energy transport, pulsation and winds. The Sun has about two million convective cells that are typically 2,000 kilometers across, but theorists believe giant and supergiant stars should only have a few large convective cells because of their low surface gravity. Determining the convection properties of most evolved and supergiant stars, such as the size of granules, has been challenging because their surfaces are frequently obscured by dust. 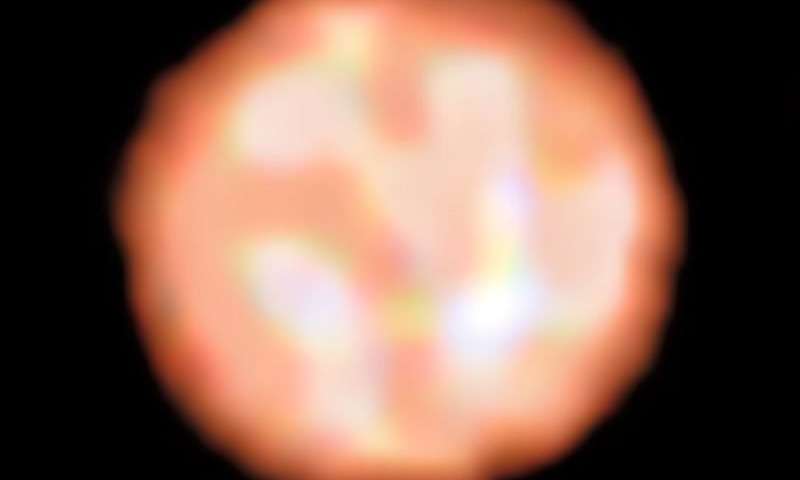 This sequence takes the viewer towards the southern constellation of Grus (The Crane). We zoom in on the pair of stars π1 Gruis (red) and π2 Gruis (bluish-white), and the bright spiral galaxy IC 5201 is also visible. The final shot shows a very detailed view of the surface of the red giant star π1 Gruis from the PIONIER instrument on the VLT Interferometer.