The afterglow from the distant neutron-star merger detected last August has continued to brighten - much to the surprise of astrophysicists studying the aftermath of the massive collision that took place about 138 million light years away and sent gravitational waves rippling through the universe.

"Usually when we see a short gamma-ray burst, the jet emission generated gets bright for a short time as it smashes into the surrounding medium - then fades as the system stops injecting energy into the outflow," says McGill University astrophysicist Daryl Haggard, whose research group led the new study. "This one is different; it's definitely not a simple, plain-Jane narrow jet." 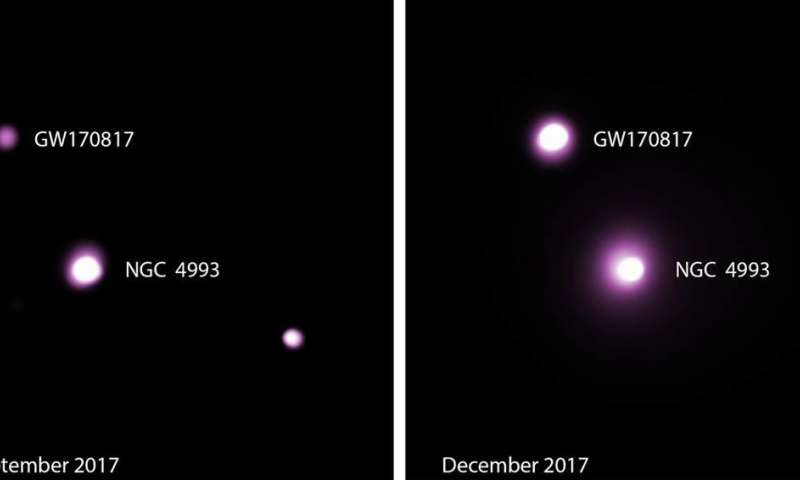 This graphic shows the X-ray counterpart to the gravitational wave source GW170817, produced by the merger of two neutron stars. The left image is the sum of observations with NASA's Chandra X-ray Observatory taken in late August and early Sept. 2017, and the right image is the sum of Chandra observations taken in early Dec. 2017. The X-ray counterpart to GW170817 is shown to the upper left of its host galaxy, NGC 4993, located about 130 million light years from Earth. The counterpart has become about four times brighter over three months. GW170817 was first observed on Aug. 17, 2017.

Binary systems containing neutron stars are born when the cores of two orbiting stars collapse in supernova explosions. Neutron stars pack the mass of our sun into the size of a city. They are so dense and packed so tightly that the boundaries atoms nuclei disappear. In such systems, Einstein's theory of general relativity predicts that neutron stars emit gravitational radiation, ripples of space-time. This causes the orbits to shrink and gradually brings the neutron stars closer together. Shown here is such a system after about 1 billion years, when two equal-mass neutron whirl around each other at 60,000 times a minute. The stars merge in a few milliseconds, sending out a burst of gravitational waves and a brief, intense gamma-ray burst.

This animation shows another neutron star merger and the gravity waves it produces. After the gamma-ray burst, the new, more massive neutron star is visible spinning at an increased rate.

LIGO's August detection of merging neutron stars was confirmed by multiple sources around the globe.