Dust is everywhere—not just in your attic or under your bed, but also in outer space. To astronomers, dust can be a nuisance by blocking the light of distant stars, or it can be a tool to study the history of our universe, galaxy, and Solar System.

For example, astronomers have been trying to explain why some recently discovered distant, but young, galaxies contain massive amounts of dust. These observations indicate that type II supernovae—explosions of stars more than ten times as massive as the Sun—produce copious amounts of dust, but how and when they do so is not well understood.

New work from a team of Carnegie cosmochemists published by Science Advances reports analyses of carbon-rich dust grains extracted from meteorites that show that these grains formed in the outflows from one or more type II supernovae more than two years after the progenitor stars exploded. This dust was then blown into space to be eventually incorporated into new stellar systems, including in this case, our own. 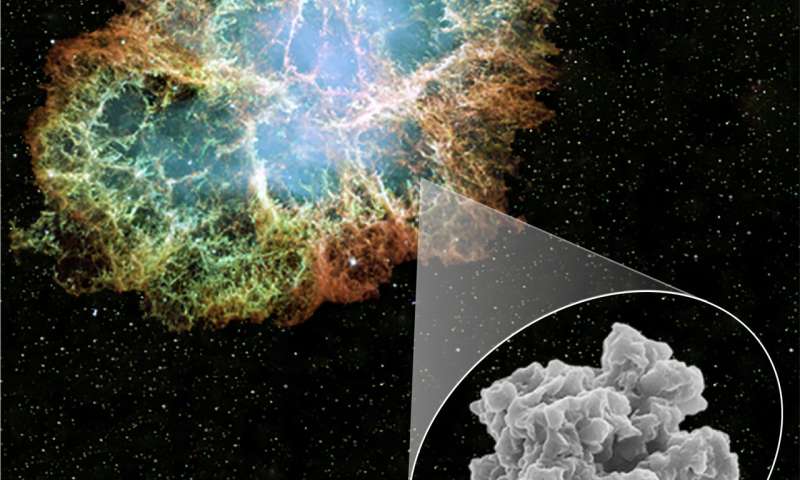 An electron microscope image of a micron-sized supernova silicon carbide, SiC, stardust grain (lower right) extracted from a primitive meteorite. Such grains originated more than 4.6 billion years ago in the ashes of Type II supernovae, typified here (upper left) by a Hubble Space Telescope image of the Crab Nebula, the remnant of a supernova explosion in 1054. Laboratory analysis of such tiny dust grains provides unique information on these massive stellar explosions. (1 μm is one millionth of a meter.)

This artist’s impression shows what the very distant young galaxy A2744_YD4 might look like and how supernovae explosions, the deaths of very massive and brilliant stars, polluted it with dust.. ALMA observations of this galaxy, seen when the Universe was just 4% of its current age, are providing insights into the birth and explosive deaths of the very first stars in the Universe.

Images taken by the Alma Radio Telescope in Chile have revealed the formation of space dust particles in a supernova 168 thousand light years away from Earth.

Experts have long hypothesized that space dust is formed by exploding stars called supernovas, but this is the first time that telescopic images have proven that theory.

By observing the progress of the supernova 1987A using before and after images, astronomers were able to identify an increase in the amount of surrounding space dust as more and more of the mass of the star turns to dust.

» This ancient stardust is the oldest ever to be examined in a lab
» A Rosetta stone for planet formation
» Astronomers inspect the formation of millisecond pulsar
» Active galactic nuclei and star formation
» Magnetic fields could hold the key to star formation
Current date/time is Wed May 18, 2022 6:26 pm