An international team of researchers, including scientists from the Instituto de Astrofísica de Canarias, has published a detailed study of the evolution of the nebula surrounding the symbiotic star R Aquarii. The study involved observations from telescopes at the Roque de los Muchachos Observatory, La Palma, and Chile taken over the course of more than two decades.

In astronomical terms, at 600 light years away, the nebula around R Aquarii is relatively close. The symbiotic star is made up of a red giant and a white dwarf that have interacted over centuries to form the magnificent surrounding nebula from material ejected from the system. 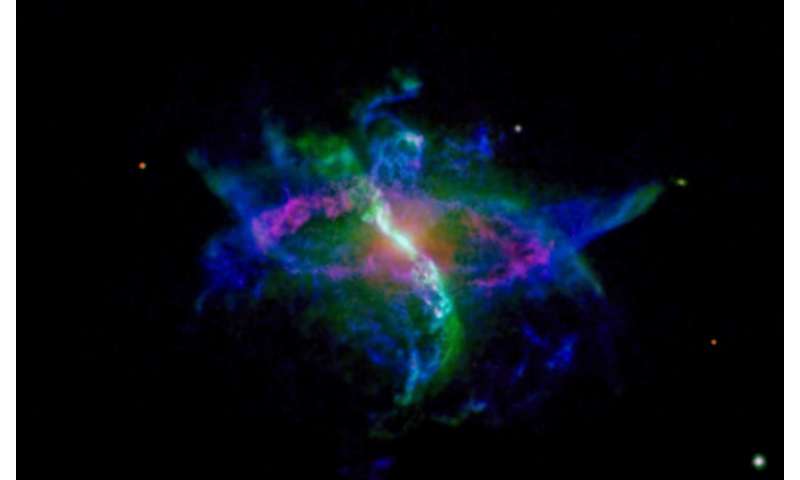 In biology, “symbiosis” refers to two organisms that live close to and interact with one another. Astronomers have long studied a class of stars — called symbiotic stars — that co-exist in a similar way. Using data from NASA’s Chandra X-ray Observatory and other telescopes, astronomers are gaining a better understanding of how volatile this close stellar relationship can be.

R Aquarii is one of the best known of the symbiotic stars. Located at a distance of about 710 light years from Earth, its changes in brightness were first noticed with the naked eye almost a thousand years ago.

R Aquraii is an unusual star system located about 710 light years from Earth.

It contains a white dwarf in orbit with a pulsating red giant star.

Because of differences in temperature and gravitational strength, the white dwarf pulls the outer layers toward it.