Although often overshadowed by its more famous cousins—including the Fornax Cluster and Pandora's Cluster—Abell 1758 contains more than its fair share of intrigue. The cluster was first identified in 1958, and initially logged as a single massive object. However, some 40 years later the cluster was observed again by the ROSAT satellite X-ray telescope, and astronomers spotted something peculiar: the cluster was not a single concentration of galaxies, but two!

Abell 1758 has since been observed many more times by various observatories—Hubble, NASA's Chandra X-ray Observatory, ESA's XMM-Newton, and more—and is now known to have both a double structure and a complex history. It contains two massive sub-clusters sitting some 2.4 million light-years apart. These components, known as A1758N (North) and A1758S (South), are bound together by gravity but without showing signs of interacting. 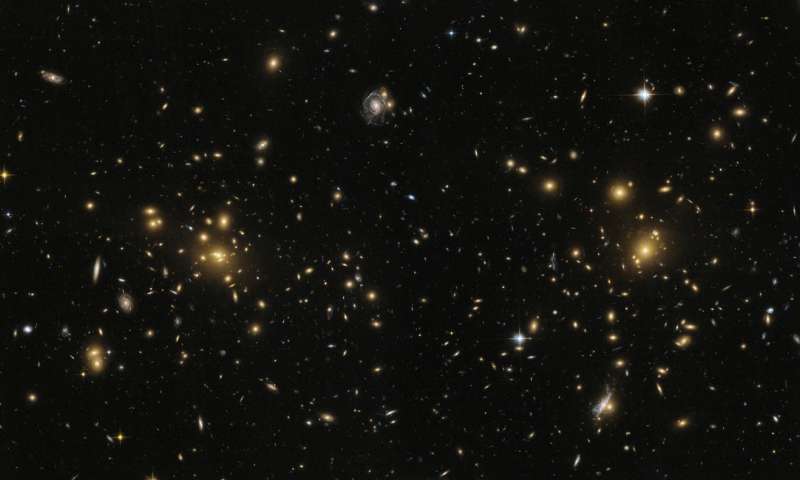 This image from the NASA/ESA Hubble Space Telescope shows the northern part of the galaxy cluster Abell 1758, A1758N. The cluster is approximately 3.2 billion light-years from Earth and is part of a larger structure containing two cluster sitting some 2.4 million light-years apart.

Resembling a swarm of flickering fireflies, this beautiful galaxy cluster glows intensely in the dark cosmos, accompanied by the myriad bright lights of foreground stars and swirling spiral galaxies. A1758N is a sub-cluster of Abell 1758, a massive cluster containing hundreds of galaxies. Although it may appear serene in this NASA/ESA Hubble Space Telescope image, the sub-cluster actually comprises two even smaller structures currently in the turbulent process of merging.

This video zooms in from a view of the night sky, through the constellation of Canes Venatici (the Hunting Dogs), visible in the northern hemisphere, to end on the NASA/ESA Hubble Space Telescope observations of the northern part of Abell 1758.