Researchers have identified a new blazar-like narrow-line Seyfert 1 galaxy that emits gamma-ray radiation. The new galaxy, designated SDSS J211852.96−073227.5, could offer insights into formation and evolution of jets of radiation produced by massive galactic central black holes. The findings are reported January 11 in a paper published on arXivorg.

Narrow-line Seyfert 1 (NLS1) galaxies are a class of active galactic nuclei (AGN) that have all the properties of type 1 Seyfert galaxies, but show peculiar characteristic like narrow Balmer lines, strong Fe II emission, and extreme properties in the X-rays.

Astronomers and astrophysicists are specially interested in the radio-loud (RL) NLS1 galaxies, which usually showcase a compact radio morphology with a one-sided core-jet structure. Previous studies indicate that some RL NLS1, due to their blazar-like characteristics, produce relativistic jets—beams of ionized matter accelerated close to the speed of light. 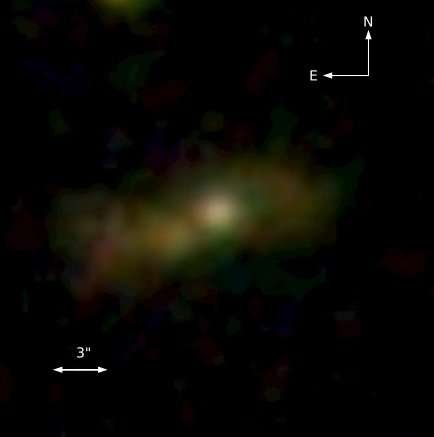 Studying new RL NLS1s could help us improve our knowledge about complex phenomena like relativistic jets as the process of their formation and evolution is still not well understood.