Cosmic collision lights up the darkness

Cosmic collision lights up the darkness

Though it resembles a peaceful rose swirling in the darkness of the cosmos, NGC 3256 is actually the site of a violent clash. This distorted galaxy is the relic of a collision between two spiral galaxies, estimated to have occurred 500 million years ago. Today it is still reeling in the aftermath of this event.

Located about 100 million light-years away in the constellation of Vela (The Sails), NGC 3256 is approximately the same size as our Milky Way and belongs to the Hydra-Centaurus Supercluster. It still bears the marks of its tumultuous past in the extended luminous tails that sprawl out around the galaxy, thought to have formed 500 million years ago during the initial encounter between the two galaxies, which today form NGC 3256. These tails are studded with young blue stars, which were born in the frantic but fertile collision of gas and dust. 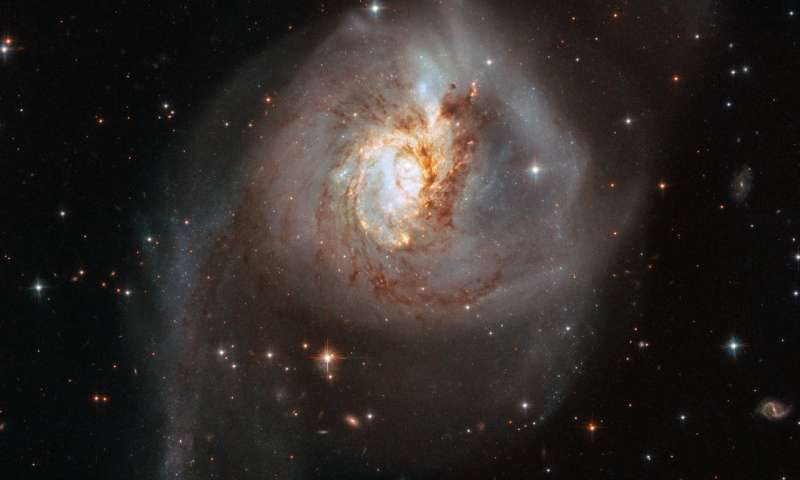 This image, taken with the Wide Field Camera 3 (WFC3) and the Advanced Camera for Surveys (ACS), both installed on the NASA/ESA Hubble Space Telescope, shows the peculiar galaxy NGC 3256. The galaxy is about 100 million light-years from Earth and is the result of a past galactic merger, which created its distorted appearance. As such, NGC 3256 provides an ideal target to investigate starbursts that have been triggered by galaxy mergers.

This video zooms in on the spiral galaxy NGC 3256, about 100 million light-years away. It starts with a view of the night sky focused on the constellation of Vela (The Sails), as seen from the ground.

It then zooms through observations from the Digitized Sky Survey 2, and ends with a view of the galaxy obtained with the NASA/ESA Hubble Space Telescope.
_________________