NASA’s Dawn spacecraft is maneuvering to its lowest-ever orbit for a close-up examination of the inner solar system’s only dwarf planet.

In early June, Dawn will reach its new, final orbit above Ceres. Soon after, it will begin collecting images and other science data from an unprecedented vantage point. This orbit will be less than 30 miles (50 kilometers) above the surface of Ceres -- 10 times closer than the spacecraft has ever been.

Dawn will collect gamma ray and neutron spectra, which help scientists understand variations in the chemical makeup of Ceres’ uppermost layer. That very low orbit also will garner some of Dawn’s closest images yet. 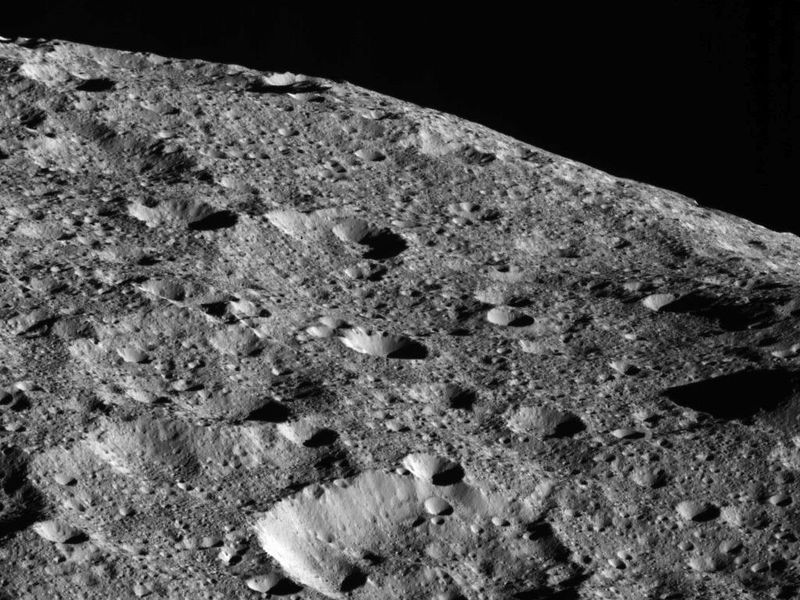 On the way to its lowest-ever and final orbit, NASA's Dawn spacecraft is observing Ceres and returning new compositional data (infrared spectra) and images of the dwarf planet's surface, such as this dramatic image of Ceres' limb.

This picture is one of the first images returned by Dawn in more than a year. Dawn captured this view on May 16, 2018 from an altitude of about 270 miles (440 kilometers). The large crater near the horizon is about 22 miles (35 kilometers) in diameter. It is located at about 23 degrees north latitude, 350 degrees east longitude, not far from a series of tholi (small mountains) that include Kwanzaa Tholus.

NASA's Dawn mission to giant asteroid Vesta and dwarf planet Ceres was released before the spacecraft's launch that year.

NASA's Dawn mission will arrive at Ceres on March 6, 2015, and will be the first spacecraft to explore a dwarf planet. Ceres is the largest body in the main asteroid belt.

This movie uses data from NASA's Dawn spacecraft to simulate the view from the spacecraft flying over the surface of the giant asteroid Vesta.