team of astronomers has performed one of the highest resolution observations in astronomical history by observing two intense regions of radiation, 20 kilometres apart, around a star 6500 light-years away.

The observation is equivalent to using a telescope on Earth to see a flea on the surface of Pluto.

The extraordinary observation was made possible by the rare geometry and characteristics of a pair of stars orbiting each other. One is a cool, lightweight star called a brown dwarf, which features a "wake" or comet-like tail of gas. The other is an exotic, rapidly spinning star called a pulsar. 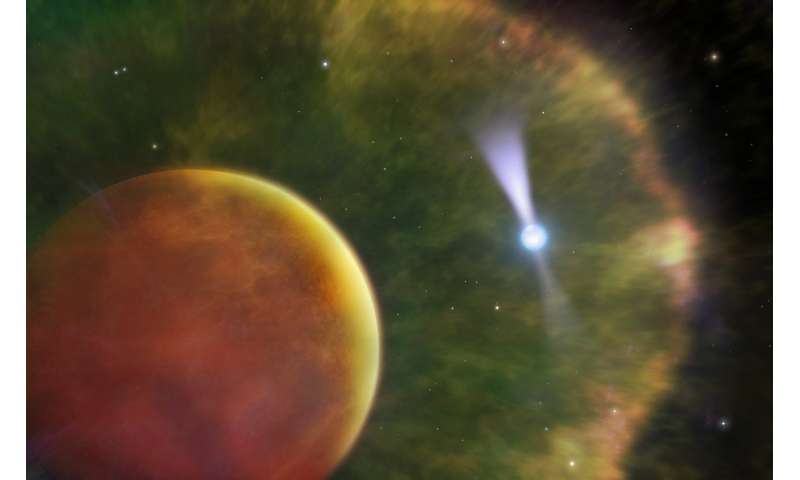 The pulsar PSR B1957+20 is seen in the background through the cloud of gas enveloping its brown dwarf star companion.

This animation shows a black widow pulsar like J0952 together with its small stellar companion, as seen from within their orbital plane.

Powerful radiation and the pulsar's "wind" — an outflow of high-energy particles — strongly heat the facing side of the companion, evaporating it over time.
_________________

In late June 2013, an exceptional binary system containing a rapidly spinning neutron star underwent a dramatic change in behavior never before observed. The pulsar's radio beacon vanished, while at the same time the system brightened fivefold in gamma rays, the most powerful form of light, according to measurements by NASA's Fermi Gamma-ray Space Telescope.

The system, known as AY Sextantis, is located about 4,400 light-years away in the constellation Sextans. It pairs a 1.7-millisecond pulsar named PSR J1023+0038 -- J1023 for short -- with a star containing about one-fifth the mass of the sun. The stars complete an orbit in only 4.8 hours, which places them so close together that the pulsar will gradually evaporate its companion.
_________________