Using very long baseline interferometry (VLBI), astronomers have investigated the magnetic field topology of the blazar 3C 279, uncovering the presence of multiple gamma-ray emission regions in this source. The discovery was presented May 11 in a paper published on arXiv.org. 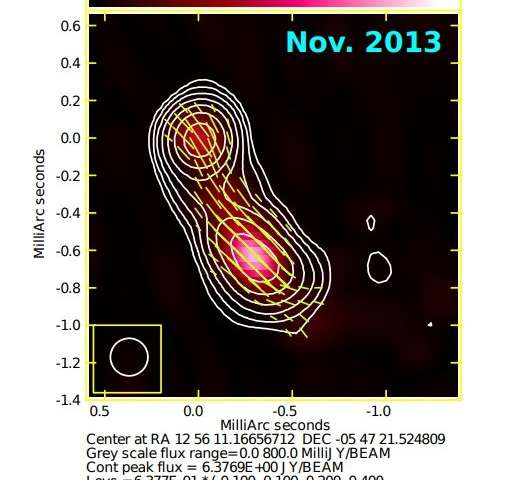 An example composite image of 3C 279 convolved with a beam size of 0.1 mas (circle in the bottom left corner). The contours represent the total intensity while the color scale is for polarized intensity image of 3C 279. The line segments (length of the segments is proportional to fractional polarization) marks the EVPA direction.

This visualization shows gamma rays detected during 3C 279's big flare by the LAT instrument on NASA's Fermi satellite. The flare is an abrupt shower of "rain" that trails off toward the end of the movie. Gamma rays are represented as expanding circles reminiscent of raindrops on water. Both the maximum size of the circle and its color represent the energy of the gamma ray, with white lowest and magenta highest. The highest-energy gamma ray the LAT detected during this flare, 52 billion electron volts, arrives near the end. In a second version of the visualization, a background map shows how the LAT detects 3C 279 and other sources by accumulating high-energy photons over time (brighter squares reflect higher numbers of gamma rays).

Five billion years ago, a great disturbance rocked a region near the monster black hole at the center of galaxy 3C 279. On June 14, the pulse of high-energy light produced by this event finally arrived at Earth, setting off detectors aboard NASA's Fermi Gamma-ray Space Telescope and other satellites. Astronomers around the world turned instruments toward the galaxy to observe this brief but record-setting flare in greater detail.
_________________

Gamma ray
A gamma ray or gamma radiation, is penetrating electromagnetic radiation arising from the radioactive decay of atomic nuclei. It consists of photons in the highest observed range of photon energy. Wikipedia

Gamma-rays are a form of electromagnetic radiation, as are radio waves, infrared radiation, ultraviolet radiation, X-rays and microwaves. Gamma-rays can be used to treat cancer, and gamma-ray bursts are studied by astronomers.

Electromagnetic (EM) radiation is transmitted in waves or particles at different wavelengths and frequencies. This broad range of wavelengths is known as the electromagnetic spectrum. That spectrum is generally divided into seven regions in order of decreasing wavelength and increasing energy and frequency. The common designations are radio waves, microwaves, infrared (IR), visible light, ultraviolet (UV), X-rays and gamma-rays.

Gamma-rays fall in the range of the EM spectrum above soft X-rays. Gamma-rays have frequencies greater than about 1018 cycles per second, or hertz (Hz), and wavelengths of less than 100 picometers (pm), or 4 × 10-9 inches. (A picometer is one-trillionth of a meter.) They occupy the same region of the EM spectrum as hard X-rays. The only difference between them is their source: X-rays are produced by accelerating electrons, whereas gamma-rays are produced by atomic nuclei.