A large international team of researchers has found what they are describing as more evidence of the existence of Planet Nine. In their paper posted on the arXiv preprint server, the group describes the behavior of a newly discovered distant object as suggestive of an influence of a large planet. 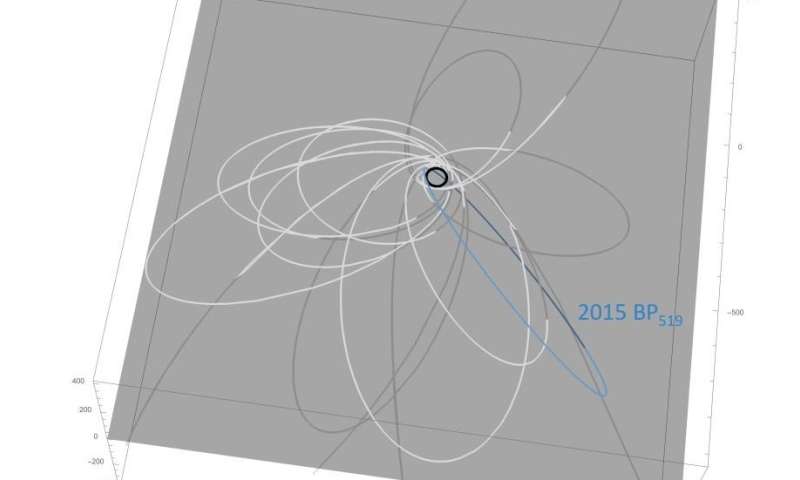 A visual representation of the orbit of 2015 BP519, plotted with the other ETNOs as comparisons. For each orbit, the darker regions on the curve denote where an object falls below the plane of the solar system. 2015 BP519 has the highest inclination of any extreme TNO discovered to date.

Dragon Thanks for sharing

I've always believed Planet 9/X is out there, good to know there's more evidence to suggest it may be
I'm in a few groups on facebook and so many people have posted pictures and things that make you wonder. I'll try dig them out and post them

Caltech researchers have found mathematical evidence suggesting there may be a "Planet X" deep in the solar system. This hypothetical Neptune-sized planet orbits our sun in a highly elongated orbit far beyond Pluto. The object, which the researchers have nicknamed "Planet Nine," could have a mass about 10 times that of Earth and orbit about 20 times farther from the sun on average than Neptune. It may take between 10,000 and 20,000 Earth years to make one full orbit around the sun.

The announcement does not mean there is a new planet in our solar system. The existence of this distant world is only theoretical at this point and no direct observation of the object nicknamed have been made. The mathematical prediction of a planet could explain the unique orbits of some smaller objects in the Kuiper Belt, a distant region of icy debris that extends far beyond the orbit of Neptune. Astronomers are now searching for the predicted planet.
In Depth

In January 2015, Caltech astronomers Konstantin Batygin and Mike Brown announced new research that provides evidence of a giant planet tracing an unusual, elongated orbit in the outer solar system. The prediction is based on detailed mathematical modeling and computer simulations, not direct observation.

This large object could explain the unique orbits of at least five smaller objects discovered in the distant Kuiper Belt.

"The possibility of a new planet is certainly an exciting one for me as a planetary scientist and for all of us," said Jim Green, director of NASA's Planetary Science Division. "This is not, however, the detection or discovery of a new planet. It's too early to say with certainty there's a so-called Planet X. What we're seeing is an early prediction based on modeling from limited observations. It's the start of a process that could lead to an exciting result."

The Caltech scientists believe Planet X may have has a mass about 10 times that of Earth and be similar in size to Uranus or Neptune. The predicted orbit is about 20 times farther from our sun on average than Neptune (which orbits the sun at an average distance of 2.8 billion miles). It would take this new planet between 10,000 and 20,000 years to make just one full orbit around the sun (where Neptune completes an orbit roughly every 165 years).
When was it Discovered?

Planet X has not yet been discovered, and there is debate in the scientific community about whether it exists. The prediction in the Jan. 20 issue of the Astronomical Journal is based on mathematical modeling.
What is its Name?

Batygin and Brown nicknamed their predicted object "Planet Nine," but the actual naming rights of an object go to the person who actually discovers it. The name used during previous hunts for the long suspected giant, undiscovered object beyond Neptune is "Planet X."

If the predicted world is found, the name must be approved by the International Astronomical Union. Planets are traditionally named for mythological Roman gods.
Why Do They Think It's There?

Astronomers studying the Kuiper Belt have noticed some of the dwarf planets and other small, icy objects tend to follow orbits that cluster together. By analyzing these orbits, the Caltech team predicted the possibility that a large, previously undiscovered planet may be hiding far beyond Pluto.

They estimate the gravity of this potential planet might explain the unusual orbits of those Kuiper objects.
What’s Next?

Astronomers, including Batygin and Brown, will begin using the world's most powerful telescopes to search for the object in its predicted orbit. Any object that far away from the sun will be very faint and hard to detect, but astronomers calculate that it should be possible to see it using existing telescopes.

"I would love to find it," says Brown. "But I'd also be perfectly happy if someone else found it. That is why we're publishing this paper. We hope that other people are going to get inspired and start searching."

Konstantin Batygin and Michael E. Brown, "Evidence for a Distant Giant Planet in the Solar System," The Astronomical Journal

» If Planet 9 is out there, here's where to look
» A Rosetta stone for planet formation
» NASA Planet Hunter on Its Way to Orbit
» Astronomers discover infant planet
» Developing planet emerges in a swirl of gas
Current date/time is Sat May 21, 2022 5:37 pm