New studies show that the seven planets orbiting the dwarf star TRAPPIST-1 are made mostly of rock, and some could hold more water than Earth.

The quest to see if there's life in other solar systems led to the astonishing discovery over a year ago of seven Earth-sized planets around TRAPPIST-1, an ultra-cool dwarf star less than 40 light years from Earth. The scientists who made this remarkable find then went on to further explore the secrets of these planets, resulting in a number of new studies that give insight into their nature and make-up. 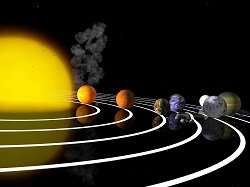 New observations, when combined with very sophisticated analysis, have now yielded good estimates of the densities of all seven of the Earth-sized planets and suggest that they are rich in volatile materials, probably water.
_________________

» How a NASA Scientist Looks in the Depths of the Great Red Spot to Find Water on Jupiter
» Earth-like biospheres on other planets may be rare
» Astronomers Spot Signs of Planets Outside the Milky Way
» Astronomers Find First-Ever Quadruple Asteroid
» Astronomers uncover largest group of rogue planets yet
Current date/time is Fri May 20, 2022 2:35 am