Peering deep into space—an astounding 90 percent of the way across the observable universe—astronomers have witnessed the beginnings of a gargantuan cosmic pileup, the impending collision of 14 young, starbursting galaxies.

This ancient megamerger is destined to evolve into one of the most massive structures in the known universe: a cluster of galaxies, gravitationally bound by dark matter and swimming in a sea of hot, ionized gas.

Using the Atacama Large Millimeter/submillimeter Array (ALMA), an international team of scientists has uncovered a startlingly dense concentration of 14 galaxies that are poised to merge, forming the core of what will eventually become a colossal galaxy cluster. 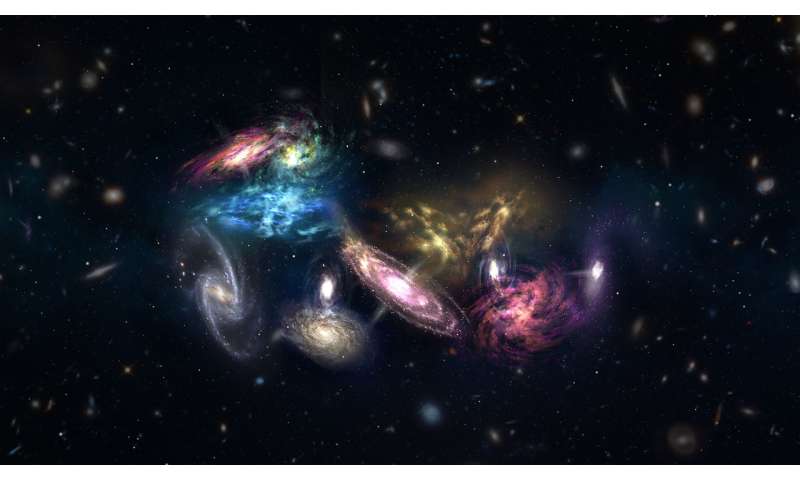 Artist impression of the 14 galaxies detected by ALMA as they appear in the very early, very distant universe. These galaxies are in the process of merging and will eventually form the core of a massive galaxy cluster. 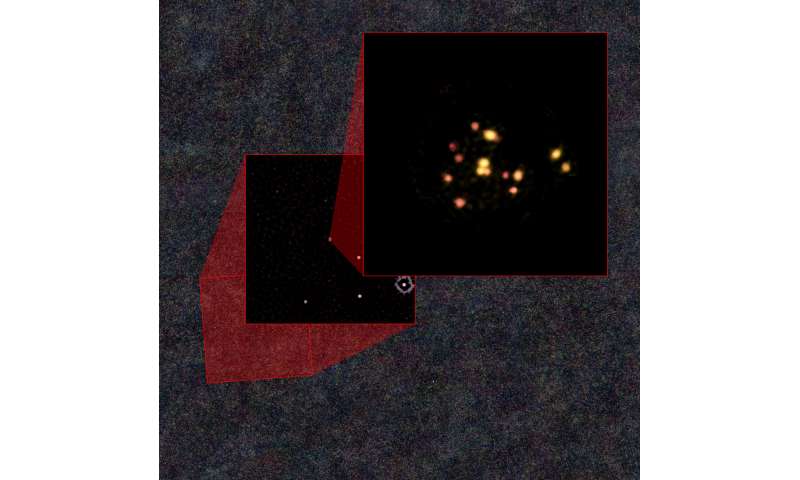 Zooming in to the galaxies discovered by ALMA that are evolving into a galaxy cluster. The outer field is from data taken by the Hershel Space Observatory. The middle image -- a portion of a much-wider survey by NSF's South Pole Telescope -- uncovered the distant galactic source that was studied by ALMA to reveal the 14 galaxies.

The earliest galaxies in the 13.8 billion-year history of our cosmos started to take shape a few hundred million years after the Big Bang, as matter flowed towards increasingly denser spots and as the first stars were igniting into life. Primordial galaxies, however, were not like the ones we are familiar with today. They started out much smaller than our Milky Way galaxy, which is now home to hundreds of billions of stars, and slowly grew more massive over billions of years. In this scenario, astronomers could not easily explain the observation of massive galaxies populated by ageing stars at relatively early epochs in cosmic history, when the Universe was only a few billion years old. How did such massive galaxies assemble in this relatively short time?