Where is the universe's missing matter?

Where is the universe's missing matter?

Astronomers using ESA's XMM-Newton space observatory have probed the gas-filled haloes around galaxies in a quest to find 'missing' matter thought to reside there, but have come up empty-handed – so where is it?

All the matter in the universe exists in the form of 'normal' matter or the notoriously elusive and invisible dark matter, with the latter around six times more prolific.

Curiously, scientists studying nearby galaxies in recent years have found them to contain three times less normal matter than expected, with our own Milky Way galaxy containing less than half the expected amount. 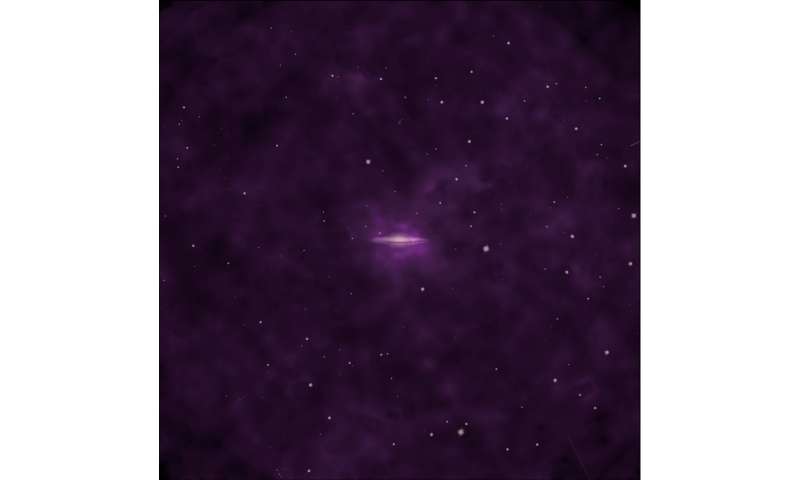 ESA's X-ray Multi-Mirror satellite XMM-Newton is the most powerful X-ray telescope ever placed in orbit.

The satellite follows a highly eccentric orbit, travelling out to nearly one third of the distance to the Moon; this enables astronomers to make very long and uninterrupted observations.

The mission was initially known as XMM after its X-ray Multi-Mirror design, and was formally called the High Throughput X-ray Spectroscopy Mission because of its great capacity to detect X-rays. The name was later modified to XMM-Newton in honor of Sir Isaac Newton.

Ongoing observations with the Atacama Large Millimeter/submillimeter Array (ALMA), however, have discovered surprising examples of massive, star-filled galaxies seen when the Cosmos was less than a billion years old. This suggests that smaller galactic building blocks were able to assemble into large galaxies quite quickly. The latest ALMA observations push back this epoch of massive-galaxy formation even further by identifying two giant galaxies seen when the Universe was only 780 million years old, or about 5 percent its current age. ALMA also revealed that these uncommonly large galaxies are nestled inside an even-more-massive cosmic structure, a halo of dark matter with as much mass as several trillion suns.

This animation shows the method used to probe the gas around distant galaxies. Astronomers can use tools such as Hubble's Cosmic Origins Spectrograph (COS) to probe faint galactic envelopes by exploiting even more distant objects — quasars, the intensely luminous centres of distant galaxies powered by huge black holes.

As the light from the distant quasar passes through the galaxy's halo, the gas absorbs certain frequencies -- making it possible to study the region around the galaxy in detail.

This new research utilised Hubble's COS to peer through the very thin outskirts of galactic halos, much further out than shown in this representation, to explore galactic gas at distances of up to twenty times greater than the visible size of the galaxy itself.