Around 99.8 percent of meteorites found on Earth’s surface came from asteroids orbiting the sun. The other tiny fraction of the 50,000 meteorites scientists have recovered so far originate on the moon and Mars. But researchers have discovered that one particular meteorite recovered from the Sudanese desert in 2008 is unique. As Sarah Kaplan reports for The Washington Post, it likely comes from a protoplanet that formed in the early days of our solar system.

The space rock, called Almahata Sitta, is extraordinary in several ways. An astronomer tracked the meteorite before it entered Earth’s atmosphere, enlisting other sky watchers to help keep tabs on it. When it finally exploded over the Nubian desert, volunteers recovered 600 bits of the rock, making it the first meteorite ever traced from space and recovered on the ground.

A piece of the Almahata Sitta in Sudan.

It exploded at an estimated 37 kilometers (23 mi) above the Nubian Desert in Sudan. Some 600 meteorites, weighing a total of 10.5 kilograms (23.1 lb), were recovered; many of these belonged to a rare type known as ureilites, which contain, among other minerals, nanodiamonds.

It was the first time that an asteroid impact had been predicted prior to its entry into the atmosphere as a meteor.

An animation of 2008 TC3's excited rotation prior to entering the atmosphere. 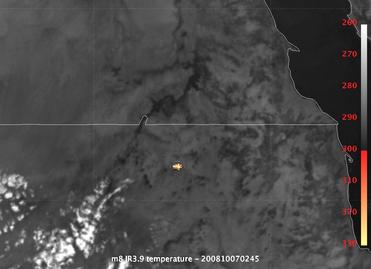 By Source, Fair use.

Diamonds found in the Almahata Sitta meteorite come from a 'proto-planet'.

The planet - slightly larger than Mercury - was destroyed in an cosmic collision.

Tiny diamonds provide scientists with a window into the formation of planets.

Tens of these budding worlds crashed into each other to form the rocky planets.