Computer simulations of peregrine falcon attacks show that the extreme speeds reached during dives from high altitudes enhance the raptors' ability to execute maneuvers needed to nab agile prey that would otherwise escape. Robin Mills and colleagues of the University of Groningen, Netherlands, and Oxford University, UK, report this discovery in PLOS Computational Biology.

By attaching video cameras and GPS trackers on a Peregrine falcon, prior research by the team showed that falcons attack their prey using the same steering rules as man-made missiles. But it remained unknown why peregrine falcons choose to catch prey by diving from great heights at speeds faster than any other animal. Such risky behavior surely places extraordinary physical and cognitive demands on the falcon.

To investigate the peregrine's dive strategy, Mills and colleagues built a physics-based computer simulation of bird flight that pits falcons against prey. The simulation incorporates the aerodynamics of bird flight, how birds flap and tuck their wings, how falcons perceive their prey and react to it with delay and how falcons target their prey like a missile. 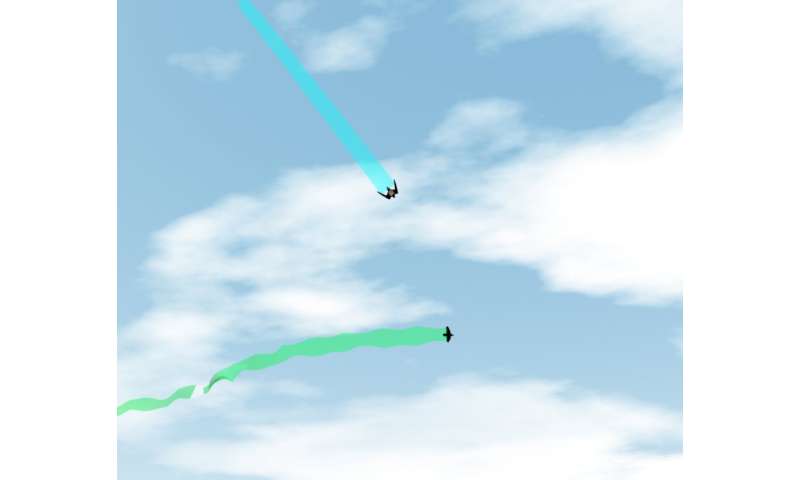 The image is a snapshot of the simulation in action. A stooping peregrine falcon (blue trajectory) is about to intercept a common starling (green trajectory) that maneuvers erratically to evade.

Skydivers can reach 150mph velocity. This is not even cruising speed for a peregrin falcon, in this clip it's estimated that the falcon must have accelerated beyond 180mph.

When the peregrine falcon goes into a dive, flying birds don't have a chance.

The Peregrine Falcon is a bird of prey. This footage shows stunning footage of one such bird diving through the sky over London in order to try and catch a pidgeon.

Tiny spy cameras allow you to see some of the world's most magnificent birds in flight. Watch this video to learn how the fastest bird on the planet, the peregrine falcon, keeps control at mind-numbing speeds, and take a flight with the master of manoeuvrability, the Gos Hawk, as it flies through dense woodland.

omg that's a cool video, I have been there as well to London.
180 miles an hour is so fast :)
Dragon

Wow, at having been there in London, impressive.

According to a National Geographic TV programme, the highest measured speed of a peregrine falcon is 389 km/h (242 mph).

The terminal velocity of a skydiver in a free-fall position, where they're falling with their belly towards the Earth is about 195 km/h (122 mph).

RubyRoses wrote:omg that's a cool video, I have been there as well to London.
180 miles an hour is so fast :)

After flying to an altitude of 39,045 meters (128,100 feet) in a helium-filled balloon, Felix Baumgartner completed a record breaking jump for the ages from the edge of space, exactly 65 years after Chuck Yeager first broke the sound barrier flying in an experimental rocket-powered airplane.

Felix reached a maximum of speed of 1,357.6 km/h or 843.6 mph(Mach 1.25) through the near vacuum of the stratosphere before being slowed by the atmosphere later during his 4:20 minute long freefall.