A "core-collapse" supernova occurs when the iron core of a massive star collapses under the force of gravity and then rebounds, generating pressure waves and shocks that propagate outward. A superluminous supernovae is a rare class of core collapse supernovae whose luminosity, equal to 10-1000 billion suns, is too high to be powered by the usual process that drives supernovae, the radioactive decay of nickel (there is not enough nickel present to do it). The source of the energetics has been hotly contested, with suggestions including shocks from the ejected material or pulsating instabilities interacting with surrounding material. The most favored model, however, is the sustained injection of energy from a source like a spinning compact remnant: a neutron star or an accreting black hole. 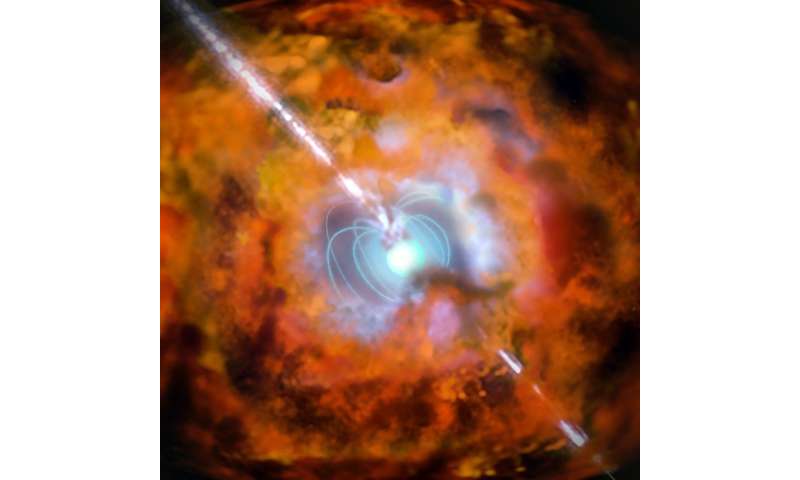 The most intense electromagnetic event known to occur in the heavens is the gamma ray burst. For many years, scientists have claimed that most gamma ray burst occur when stars run out of nuclear fuel then collapse to form a black hole, neutron star or quark star. However, a recently detected gamma ray burst has left astronomers openly baffled.

This supercomputer simulation shows one of the most violent events in the universe: a pair of neutron stars colliding, merging and forming a black hole. A neutron star is the compressed core left behind when a star born with between eight and 30 times the sun's mass explodes as a supernova. Neutron stars pack about 1.5 times the mass of the sun — equivalent to about half a million Earths — into a ball just 12 miles (20 km) across.