Galaxy clusters can contain thousands of galaxies all held together by the glue of gravity. At one point in time they were believed to be the largest structures in the universe—until they were usurped in the 1980s by the discovery of superclusters. These massive formations typically contain dozens of galaxy clusters and groups and span hundreds of millions of light-years. However, clusters do have one thing to cling on to: superclusters are not held together by gravity, so galaxy clusters still retain the title of the biggest structures in the universe bound by gravity. 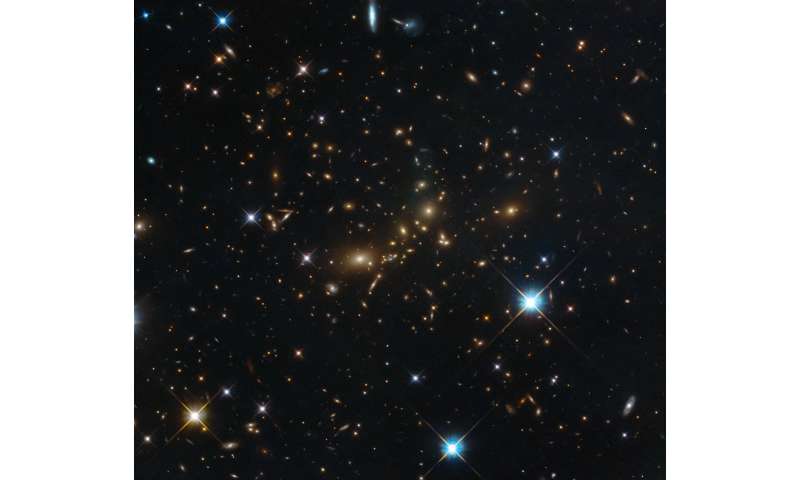 This NASA/ESA Hubble Space Telescope image shows a massive galaxy cluster glowing brightly in the darkness. Despite its beauty, this cluster bears the distinctly unpoetic name of PLCK G308.3-20.2.

The Hubble telescope took photographs of the cluster of galaxies PLCK G308.3-20.2, in the constellation Apus, which is one of the largest objects in the observable universe, reports the website of the space observatory.

The observations of the movement of the PLCK G308.3-20.2 and other galaxy clusters already made it possible to find the two largest structures in the universe, which influence the movement of the Milky Way and other nearby galaxies. These include the Great Attractor - the supercluster of Abell 3627 galaxies - and the Dipolo Repulsor - a huge vacuum area located 'behind' our galaxy.

This video shows striking new observations of a spiral galaxy moving through the heart of a galaxy cluster named Abell 3627. This cluster is violently ripping the spiral's entrails out into space, leaving bright blue streaks as telltale clues to this cosmic crime.