Gone in a (cosmological) flash: a team of astronomers found 72 very bright, but quick events in a recent survey and are still struggling to explain their origin. Miika Pursiainen of the University of Southampton will present the new results on Tuesday 3 April at the European Week of Astronomy and Space Science.

The scientists found the transients in data from the Dark Energy Survey Supernova Programme (DES-SN). This is part of a global effort to understand dark energy, a component driving an acceleration in the expansion of the Universe. DES-SN uses a large camera on a 4-metre telescope in the Cerro Tololo Inter-American Observatory (CTIO) in the Chilean Andes. The survey looks for supernovae, the explosion of massive stars at the end of their lives. A supernova explosion can briefly be as bright as a whole galaxy, made up of hundreds of billions of stars. 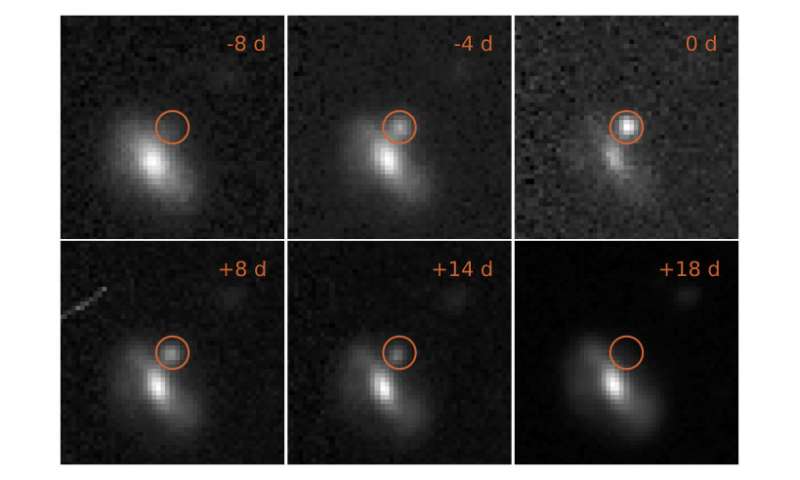 Images of one of the transient events, from eight days before the maximum brightness to 18 days afterwards. This outburst took place at a distance of 4 billion light years. 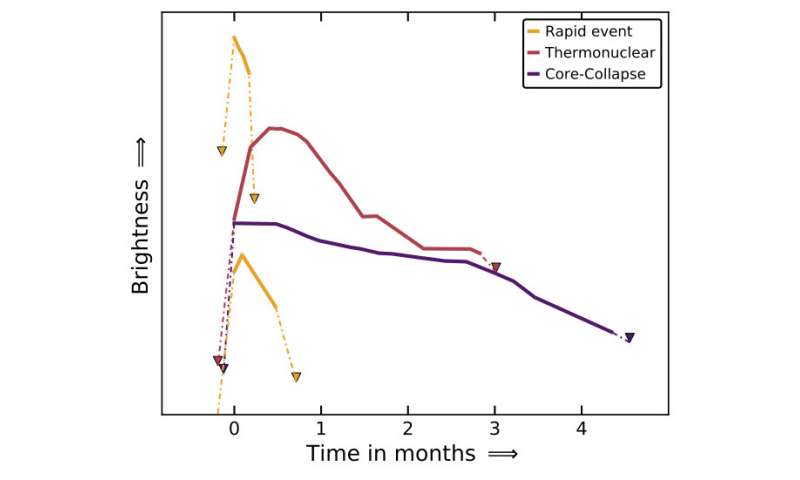 Graph showing the evolution of brightness for two quick transient events and two typical supernovae: thermonuclear and core-collapse. In thermonuclear supernovae an Earth-sized remnant (a white dwarf) of a small sun-like star accretes a critical mass of material from a companion star and explodes. In a core-collapse supernova a massive star exhausts the fuel in its core which causes the core to collapse, triggering an explosion.

This movie shows the time-evolution of the shock wave that is created when the core of a massive star collapses to a proto-neutron star. The shock does not immediately explode the star but "stalls" (because the outer parts of the star [not shown in the movie] are excerting ram pressure on it). The shock is "revived" within a tenth of a second or so, most likely, by heating by neutrinos emitted from the proto-neutron star. The different colors correspond to gas of different temperature (the variable shown is "specific entropy", which is closely related to temperature). Blue corresponds to the coldest gas, green is hotter gas, and yellow and red are the hottest gas.

The box-like features visible at the beginning of the movie are an artifact of the simulation method that was used. They appear when the newborn shock crosses a grid boundary of the computational grid.

GRB 101225A, aka the 'Christmas burst,' was an strangely long-lasting gamma-ray burst. The distance was not measured; astronomers originally had two radically different interpretations. In the first, a solitary neutron star in our own galaxy swallowed an approaching comet-like body. In the second, a neutron star is ingested by an mature giant star in a galaxy far away.

New measurement of the burst's host galaxy suggest it represents the supernova of a huge star hundreds of times larger than the sun.

3D simulation of the density and the reaction progress variable in the explosion of Ia type supernova with 6 km resolution for a 18 km initial bubble radius, 42 km ignition offset.