NASA's Transiting Exoplanet Survey Satellite (TESS) is undergoing final preparations in Florida for its April 16 launch to find undiscovered worlds around nearby stars, providing targets where future studies will assess their capacity to harbor life.

"One of the biggest questions in exoplanet exploration is: If an astronomer finds a planet in a star's habitable zone, will it be interesting from a biologist's point of view?" said George Ricker, TESS principal investigator at the Massachusetts Institute of Technology (MIT) Kavli Institute for Astrophysics and Space Research in Cambridge, which is leading the mission. "We expect TESS will discover a number of planets whose atmospheric compositions, which hold potential clues to the presence of life, could be precisely measured by future observers." 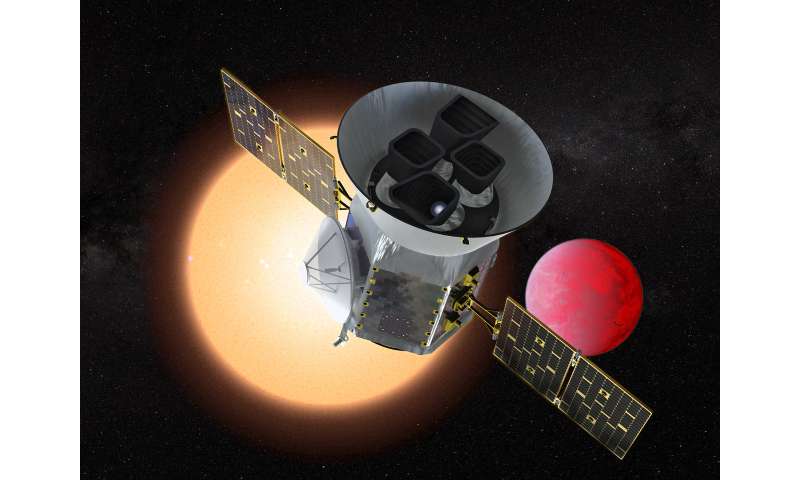 Illustration of the Transiting Exoplanet Survey Satellite (TESS) in front of a lava planet orbiting its host star. TESS will identify thousands of potential new planets for further study and observation.

NASA’s Transiting Exoplanet Survey Satellite (TESS) will find undiscovered worlds around bright nearby stars, providing targets where future studies will assess their capacity to harbor life. TESS is a NASA Astrophysics Explorer mission, led and operated by MIT and managed by Goddard. With the help of a gravitational assist from the Moon, the spacecraft will settle into a 13.7-day orbit around Earth.

Four wide-field cameras will give TESS a field-of-view that covers 85 percent of the entire sky. Within this vast visual perspective, the sky has been divided into 26 sectors that TESS will observe one by one. The first year of observations will map the 13 sectors encompassing the southern sky, and the second year will map the 13 sectors of the northern sky.

The spacecraft will be looking for a phenomenon known as a transit, where a planet passes in front of its star, causing a periodic and regular dip in the star’s brightness. NASA’s Kepler spacecraft used the same method to spot more than 2,600 confirmed exoplanets, most of them orbiting faint stars 300 to 3,000 light-years away

TESS will concentrate on stars less than 300 light-years away and 30 to 100 times brighter than Kepler’s targets. The brightness of these target stars will allow researchers to use spectroscopy, the study of the absorption and emission of light, to determine a planet’s mass, density and atmospheric composition. Water and other key molecules in its atmosphere can give us hints about a planet's capacity to harbor life.