Indian astronomers have detected two radio relics in the nearby merging galaxy cluster known as Abell 168. The discovery, which could improve our understanding of merging processes in galaxy clusters, was detailed March 16 in a paper published on the arXiv pre-print repository.

Radio relics are diffuse, elongated radio sources of synchrotron origin. They occur in the form of spectacular single or double symmetric arcs at the peripheries of galaxy clusters. Astronomers are especially interested in searching for such sources in merging galaxy clusters as the number of radio relics associated with merger shocks is still small. 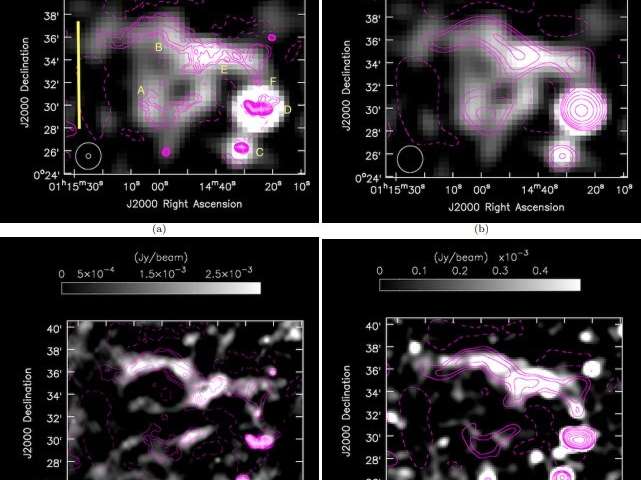 A star that wanders too close to a supermassive black hole is doomed, as it should be ripped apart by extreme tidal forces. The debris from the star is expected to fall towards the black hole, getting hotter and producing intense X-rays. The X-rays should then fade as the hot gas spirals inward.

Using Chandra, this behavior may have been spotted, for the first time, in a dwarf galaxy. Bright X-rays from the location of this small galaxy were seen in 1999 until they faded and eventually disappeared in 2005. In the past few years, Chandra and other astronomical satellites have identified several suspected cases of a supermassive black hole ripping apart a nearby star. This newly discovered episode is different because it has been associated with a much smaller galaxy than these other cases.

The black hole responsible for the destruction may be only a few hundred thousand times as massive as the Sun, making it ten times less massive than the galaxy's supermassive black hole.

A magnetohydrodynamics simulation of jets emerging from an active galactic nucleus (AGN) powered by the accretion of matter onto a supermassive black hole.

The AGN is in a crosswind, moving at nearly the local speed of sound through a background medium representative of the outskirts of a massive cluster of galaxies.

The rendering shows the fraction of jet material in each computational zone as the crosswind sweeps the jets into tails that are millions of light-years in length over the course of hundreds of millions of years.

Relativistic particles accelerated by the AGN are entrained in the tails and emit at radio wavelengths until they cool, these types of objects are observed by astronomers as 'tailed radio galaxies'.

After the AGN shuts off and the tails have cooled below detection, large clouds of mildly relativistic particles remain that can be reaccelerated by a passing shock wave, a scenario which may account for the brightness of immense, diffuse radio sources known as 'radio relics'.

Radio emission from a merging galaxy cluster, where electrons are accelerated at shock fronts, and emit synchrotron radiation in the presence of the magnetic fields. Make sure to increase the resolution setting.