A runaway star in the Small Magellanic Cloud

A runaway star in the Small Magellanic Cloud

Astronomers have discovered a rare "runaway" star that is speeding across its galaxy at a 300,000 miles per hour (at that speed it would take about half a minute to travel from Los Angeles to New York). The runaway star (designated J01020100-7122208) is located in the Small Magellanic Cloud, a close neighbor of the Milky Way Galaxy, and is believed to have once been a member of a binary star system. When the companion star exploded as a supernova, the tremendous release of energy flung J01020100-7122208 into space at its high speed. The star is the first runaway yellow supergiant star ever discovered, and only the second evolved runaway star to be found in another galaxy. 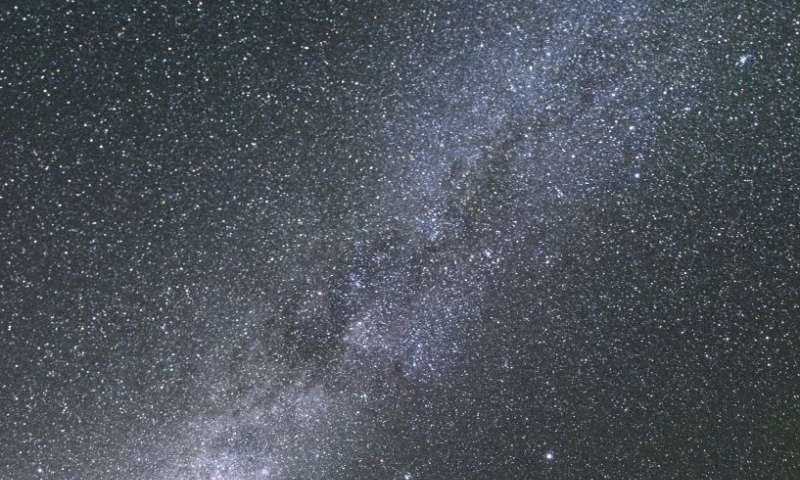 Observations of the yellow supergiant runaway were conducted using the large 6.5-meter Magellan telescope at Las Campanas Observatory. The Large Magellanic Cloud (companion galaxy to the Small Magellanic Cloud, not shown) is visible right above the telescope enclosure. The bright band of light from lower left to upper right is the southern Milky Way.

High-velocity star US 708 was ejected from an ultra compact binary system by a thermonuclear supernova explosion. The star is traveling with a velocity of about 1,200 kilometers per second or 2.7 million miles per hour and will escape the gravity of our galaxy.

ESO’s Very Large Telescope Interferometer has revealed the largest yellow star — and one of the ten largest stars found so far. This hypergiant has been found to measure more than 1300 times the diameter of the Sun, and to be part of a double star system, with the second component so close that it is in contact with the main star. Observations spanning over sixty years, some from amateur observers, also indicate that this rare and remarkable object is changing very rapidly and has been caught during a very brief phase of its life.

Using ESO’s Very Large Telescope Interferometer (VLTI), Olivier Chesneau (Observatoire de la Côte d’Azur, Nice, France) and an international team of collaborators have found that the yellow hypergiant star HR 5171 A [1] is absolutely huge — 1300 times the diameter of the Sun and much bigger than was expected. This makes it the largest yellow star known. It is also in the top ten of the largest stars known — 50% larger than the famous red supergiant Betelgeuse — and about one million times brighter than the Sun.

“The new observations also showed that this star has a very close binary partner, which was a real surprise,” says Chesneau. “The two stars are so close that they touch and the whole system resembles a gigantic peanut.”

Yellow hypergiants are very rare, with only a dozen or so known in our galaxy — the best-known example being Rho Cassiopeiae. They are among the biggest and brightest stars known and are at a stage of their lives when they are unstable and changing rapidly. Due to this instability, yellow hypergiants also expel material outwards, forming a large, extended atmosphere around the star.

Despite its great distance of nearly 12 000 light-years from Earth, the object can just about be seen with the naked eye by the keen-sighted. HR 5171 A has been found to be getting bigger over the last 40 years, cooling as it grows, and its evolution has now been caught in action. Only a few stars are caught in this very brief phase, where they undergo a dramatic change in temperature as they rapidly evolve.

» Runaway star might explain black hole's disappearing act
» A giant 'singing' cloud in space will help us to understand how star systems form
» Snake in the clouds—astronomers discover a new dwarf galaxy in the Magellanic Bridge
» Odd behavior of star reveals lonely black hole hiding in giant star cluster
» The Milky Way could be spreading life from star to star
Current date/time is Fri May 20, 2022 2:19 am