Statistical analysis of supermassive black holes suggests that the spin of the black hole may play a role in the generation of powerful high-speed jets blasting radio waves and other radiation across the universe.

Black holes absorb light and all other forms of radiation, making them impossible to detect directly. But the effects of black holes, in particular accretion disks where matter is shredded and superheated as it spirals down into the black hole, can release enormous amounts of energy. The accretion disks around supermassive black holes (black holes with masses millions of times that of the sun) are some of the brightest objects in the universe. These objects are called "quasi-stellar radio sources" or "quasars," but actually this is a misnomer; only about 10% of quasars emit strong radio waves. We now know that "radio loud" quasars occur when a fraction of the matter in the accretion disk avoids the final fate of falling into the black hole and comes blasting back out into space in high-speed jets emitted from the poles of the black hole. But we still don't understand why jets form some times and not other times. 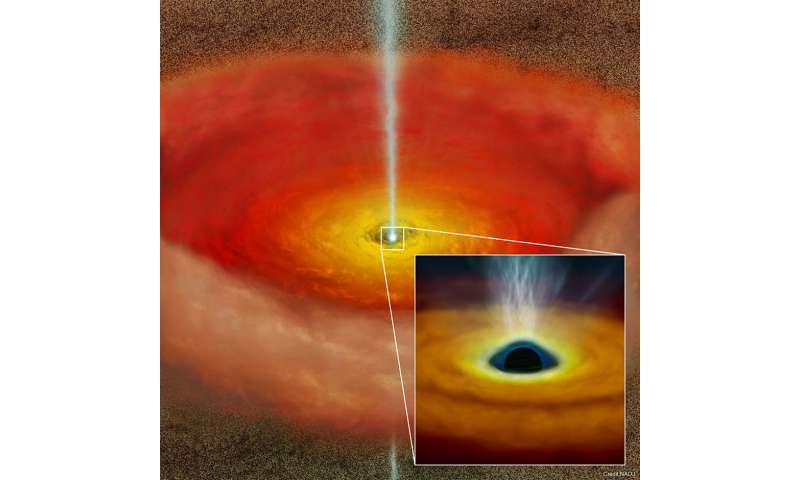 Artist's conception of the accretion disk around a spinning super-massive black hole. The rotation of the black hole may cause the high-speed jet which makes the object radio-loud.

This video clip compares the effects on emission lines of spinning and non-spinning black holes.

» Black holes gain new powers when they spin fast enough
» What does a black hole look like?
» Black hole 'donuts' are actually 'fountains'
» A black hole slashed a star apart
» First detection of light from behind a black hole
Current date/time is Sat May 21, 2022 4:11 pm