In April and July 2014, the Sun emitted three jets of energetic particles into space, that were quite exceptional: the particle flows contained such high amounts of iron and helium-3, a rare variety of helium, as have been observed only few times before. Since these extraordinary events occurred on the backside of our star, they were not discovered immediately. A group of researchers headed by the Max Planck Institute for Solar System Research (MPS) and the Institute for Astrophysics of the University of Göttingen (Germany) present a comprehensive analysis now in the Astrophysical Journal. It is based on data from the twin space probes STEREO A and STEREO B, which – at that time still both operating – were in a favorable observation position behind the Sun at the crucial time. For the first time, the study shows a correlation between helium-3 and iron-rich particle flows and helical eruptions of ultraviolet radiation in the Sun's atmosphere. These could provide the necessary energy to accelerate the particles into space. 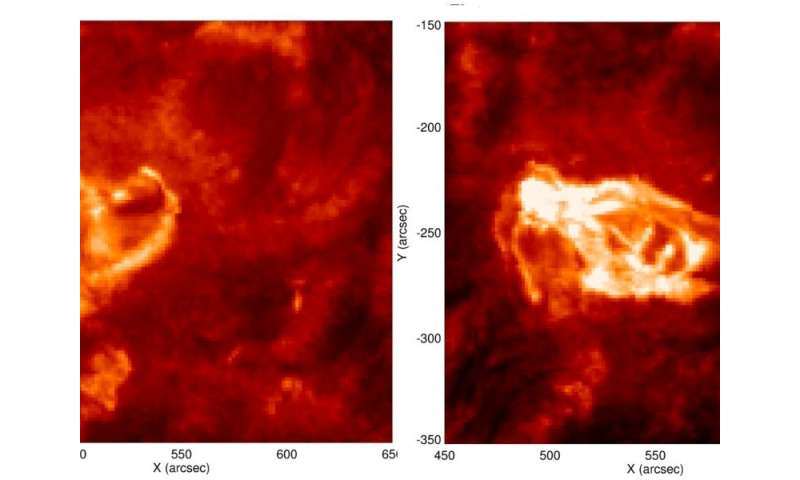 This images show the measurements performed by the SECCHI/EUVI-instrument onboard STEREO from 29 April 2014. The image on the left was taken ten minutes prior to the one on the right. The emissions of extreme ultraviolet light (at a wavelength of 304 Å) clearly show a helical motion of the plasma flows.

Grasping what drives that magnetic system is crucial for understanding the nature of space throughout the solar system: The sun's invisible magnetic field is responsible for everything from the solar explosions that cause space weather on Earth – such as auroras – to the interplanetary magnetic field and radiation through which our spacecraft journeying around the solar system must travel.

» In first, scientists trace fastest solar particles to their roots on the Sun
» Milky Way-type dust particles discovered in a galaxy 11 billion light years from Earth
» Map of the solar corona’s magnetic field
» magnetic waves in action in the Sun's photosphere
» Magnetic fields found in a jet from a baby star
Current date/time is Sat May 21, 2022 4:26 pm