The blind cave dragon, as it is called, has long endeared biologists with its unparalleled weirdness. These snake-like amphibians sport small limbs, antler-like gills set back from their long snouts and translucent, pinkish-white skin that resembles human flesh. At up to 12 inches long, they are thought to be the world’s largest cave animal. They live up to 70 years, the entirety of which they spend deep underground in the Dinaric Alps, which includes parts of Slovenia, Italy, Croatia and Herzegovina.

“I’m fascinated about their exceptional adaptation to the extreme environment of the caves,” says Gergely Balázs, a cave biology PhD student at the Eötvös Loránd University in Budapest who explores the caves where these dragons live. “And they are baby dragons, for God’s sake.”

Well, not exactly. In the past, on the odd occasion that flooding would wash one up to the surface, locals believed the unusual amphibians to be baby dragons—hence the nickname. One of the creature’s other monikers, proteus, stems from an early Greek sea god who had the ability to change shape. And while the origins of the German name (olm) are uncertain, the Slovenian name (človeška ribica) translates roughly to “human-fish.”

The olm, or cave dragon, is the largest cave-adapted animal in Europe. These strange creatures spend their entire lives in caves, and face threats from pollution runoff from agriculture and chemical plants on the surface.

The olm or proteus (Proteus anguinus) is an aquatic salamander in the family Proteidae, the only exclusively cave-dwelling chordate species found in Europe. In contrast to most amphibians, it is entirely aquatic; it eats, sleeps, and breeds underwater.

This animal is most notable for its adaptations to a life of complete darkness in its underground habitat. The olm's eyes are undeveloped, leaving it blind, while its other senses, particularly those of smell and hearing, are acutely developed. It also lacks any pigmentation in its skin. It has three toes on its forelimbs, but only two toes on its hind feet. 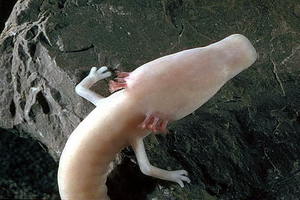 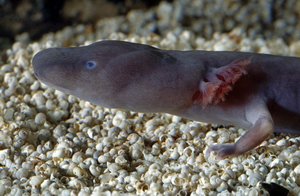 The black olm, a subspecies, has a shorter head with more-developed eyes compared to the nominate subspecies.

In a Slovenian cave visited by a million tourists every year, a bizarre and rare amphibian is guarding a significant clutch of eggs.
The olm, a blind salamander found in cave rivers of the Balkans, is thought to live for more than 100 years but reproduces just once or twice a decade.

The video shows the path of Proteus anguinus' reproduction process, from laying eggs to their hatching in Postojna Cave, the biggest show cave in Europe. Once believed to be real-life dragons, olms live in the complete darkness of underground caves.