The Lampyridae are a family of insects in the beetle order Coleoptera. They are winged beetles, commonly called fireflies or lightning bugs for their conspicuous use of bioluminescence during twilight to attract mates or prey. Fireflies produce a "cold light", with no infrared or ultraviolet frequencies. This chemically produced light from the lower abdomen may be yellow, green, or pale red, with wavelengths from 510 to 670 nanometers.

About 2,100 species of fireflies are found in temperate and tropical climates. Many are in marshes or in wet, wooded areas where their larvae have abundant sources of food. Their larvae emit light and often are called "glowworms" in Eurasia and elsewhere. In the Americas, "glow worm" also refers to the related Phengodidae.

Light production in fireflies is due to a type of chemical reaction called bioluminescence. This process occurs in specialized light-emitting organs, usually on a firefly's lower abdomen. 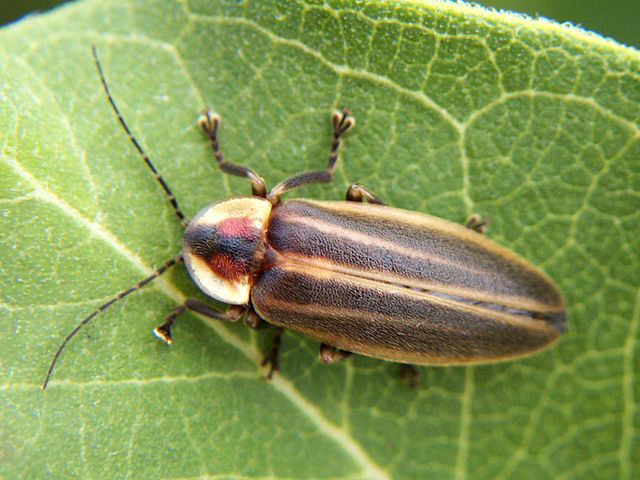 By Bruce Marlin - Own work 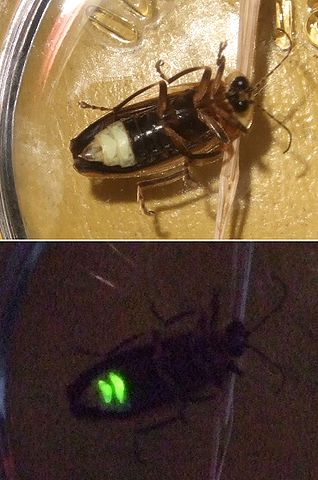 Firefly (species unknown) captured in eastern Canada – the top picture is taken with a flash, the bottom with only the self-emitted light.

Time-lapse of New Zealand’s Glowworm caves as they have never been seen before. Filming this involved sleeping in caves for multiple days in complete darkness with just the sounds of the cave to keep us company (and the occasional eel).

For around 60 years, scientists have known what basic ingredients go into the box—things like oxygen, calcium, magnesium, and a naturally occurring chemical called luciferin.

And they've known what comes out of the box—photons, or light, in the form of the yellow, green, orange, and even blue flickers you see dancing across your backyard on summer nights.

But until recently, the actual chemical reactions that produce the firefly's light have been shrouded in mystery. And scientists like Bruce Branchini at Connecticut College love a good mystery. (Also see "Fireflies Are 'Cannibals'—And More Surprising Facts About the Summertime Insect.")

"The way enzymes and proteins can convert chemical energy into light is a very basic phenomenon," he says, "and we wanted to know how that biochemical process worked."

In new research, Branchini and his colleagues did just that: They found an extra oxygen electron that's responsible for the beetles' summertime glow.