A Crab Walks Through Time

A Crab Walks Through Time

Next year marks the 20th anniversary of NASA’s Chandra X-ray Observatory launch into space. The Crab Nebula was one of the first objects that Chandra examined with its sharp X-ray vision, and it has been a frequent target of the telescope ever since.

There are many reasons that the Crab Nebula is such a well-studied object. For example, it is one of a handful of cases where there is strong historical evidence for when the star exploded. Having this definitive timeline helps astronomers understand the details of the explosion and its aftermath.

In the case of the Crab, observers in several countries reported the appearance of a “new star” in 1054 A.D. in the direction of the constellation Taurus. Much has been learned about the Crab in the centuries since then. Today, astronomers know that the Crab Nebula is powered by a quickly spinning, highly magnetized neutron star called a pulsar, which was formed when a massive star ran out of its nuclear fuel and collapsed. The combination of rapid rotation and a strong magnetic field in the Crab generates an intense electromagnetic field that creates jets of matter and anti-matter moving away from both the north and south poles of the pulsar, and an intense wind flowing out in the equatorial direction. 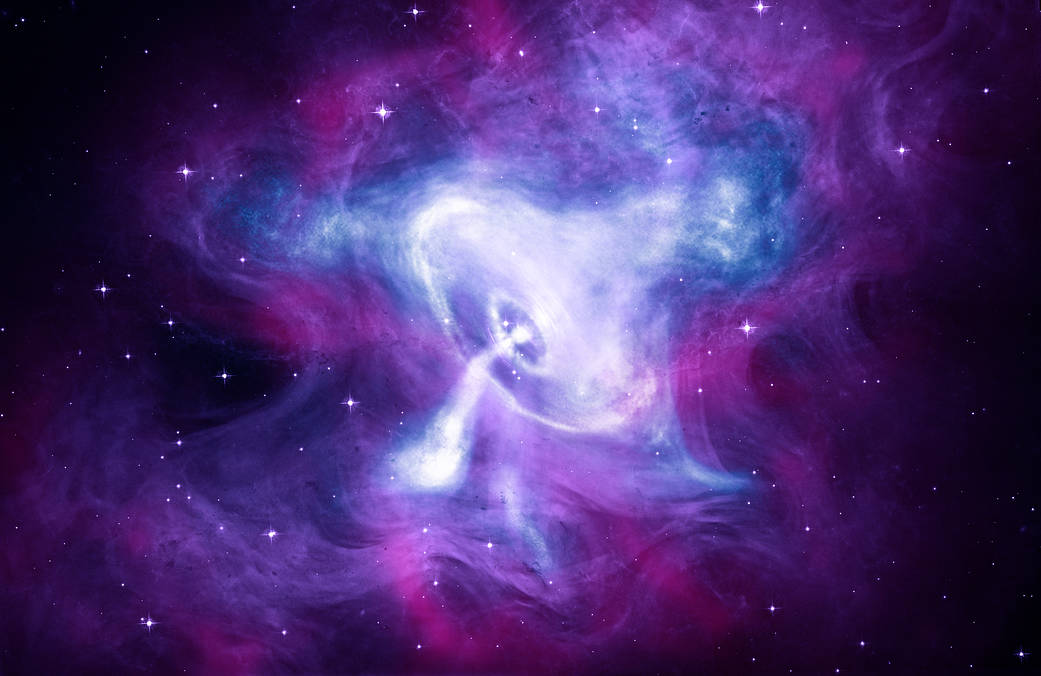 The latest image of the Crab is a composite with X-rays from Chandra (blue and white), NASA's Hubble Space Telescope (purple) and NASA's Spitzer Space Telescope (pink). The extent of the X-rays in this image is smaller than the others because extremely energetic electrons emitting X-rays radiate away their energy more quickly than the lower-energy electrons emitting optical and infrared light.

This movie shows dynamic rings, wisps and jets of matter and antimatter around the pulsar in the Crab Nebula as observed in X-ray light by Chandra (left, blue) and optical light by Hubble (right, red). The movie was made from 7 still images of Chandra and Hubble observations taken between November 2000 and April 2001.

Fermi's LAT discovered a gamma-ray 'superflare' from the Crab Nebula on April 12, 2011. These images show the number of gamma rays with energies greater than 100 million electron volts from a region of the sky centered on the Crab Nebula.

The video eliminates emission from the Crab pulsar by showing the sky in between its pulses. The bright object to the left is the Geminga pulsar.

» Can wormholes act like time machines?
» NASA’s NICER Finds X-ray Boosts in the Crab Pulsar’s Radio Bursts
» Saying hello for the first time
» day time dreaming
» Once Upon a Time in a Thunderstorm
Current date/time is Tue Jun 28, 2022 3:50 pm