A research team led by Teruyuki Hirano of Tokyo Institute of Technology's Department of Earth and Planetary Sciences has validated 15 exoplanets orbiting red dwarf systems. One of the brightest red dwarfs, K2-155 that is around 200 light years away from Earth, has three transiting super-Earths. Of those three super-Earths, the outermost planet, K2-155d, with a radius 1.6 times that of Earth, could be within the host star's habitable zone. 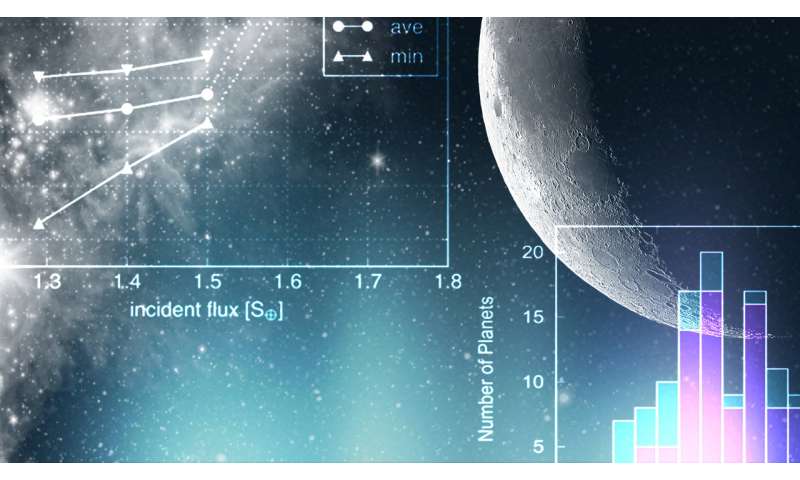 red dwarfs 'near' our solar system.Among these new planets is a potentially habitable 'super-Earth' that could have liquid oceans like our own.The planet, known as K2-155d, is 1.6 times the size of Earth and is in the host star's habitable zone 200 light years away.

In this conceptual animation, X-ray and extreme ultraviolet light from a young red dwarf star cause ions to escape from an exoplanet’s atmosphere. Scientists have developed a model that estimates the oxygen ion escape rate on planets around red dwarfs, which plays an important role in determining an exoplanet’s habitability. To determine a star’s habitable zone, scientists have traditionally considered how much heat the star emits.

Stars more massive than our sun produce more heat and light, so the habitable zone must be farther out. Smaller, cooler stars yield close-in habitable zones.

Astronomers have detected the strongest, hottest, and longest-lasting sequence of stellar flares ever seen from a red dwarf star - 10,000 times more powerful than the largest solar flare ever recorded.

The "superflare" came from one of the stars in a close binary system known as DG Canum Venaticorum (DG CVn), which is 60 light-years away. Both stars are dim red dwarfs with masses and sizes about one-third of our sun's. They orbit each other at about three times Earth's average distance from the sun.

Astronomers estimate DG CVn was born about 30 million years ago, which makes it less than 0.7 percent the age of the solar system.

At its peak, the flare reached temperatures of 360 million degrees Fahrenheit (200 million degrees Celsius), more than 12 times hotter than the center of the sun. The star's brightness in visible and ultraviolet light, measured both by ground-based observatories and Swift's Optical/Ultraviolet Telescope, rose by 10 and 100 times, respectively. The initial flare's X-ray output, as measured by Swift's X-Ray Telescope, puts even the most intense solar activity ever recorded.

The largest solar explosions are classified as extraordinary, or X class, solar flares based on their X-ray emission. The biggest flare we've ever seen from the sun occurred in November 2003 and is rated as X 45.

The flare on DG CVn, if viewed from a planet the same distance as Earth is from the sun, would have been roughly 10,000 times greater than this, with a rating of about X 100,000.

Three hours after the initial outburst, with X-rays on the downswing, the system exploded with another flare nearly as intense as the first. These first two explosions may be an example of "sympathetic" flaring often seen on the sun, where an outburst in one active region triggers a blast in another.

Over the next 11 days, Swift detected a series of successively weaker blasts. Osten compares the dwindling series of flares to the cascade of aftershocks following a major earthquake. All told, the star took a total of 20 days to settle back to its normal level of X-ray emission.

How can a star just a third the size of the sun produce such a giant eruption?

The key factor is its rapid spin, a crucial ingredient for amplifying magnetic fields. The flaring star in DG CVn rotates in under a day, about 30 or more times faster than our sun. The sun also rotated much faster in its youth and may well have produced superflares of its own, but, fortunately for us, it no longer appears capable of doing so.