Galaxies are not static islands of stars—they are dynamic and ever-changing, constantly on the move through the darkness of the Universe. Sometimes, as seen in this spectacular Hubble image of Arp 256, galaxies can collide in a crash of cosmic proportions.

350 million light-years away in the constellation of Cetus (the Sea Monster), a pair of barred spiral galaxies have just begun a magnificent merger. This image suspends them in a single moment, freezing the chaotic spray of gas, dust and stars kicked up by the gravitational forces pulling the two galaxies together.

Though their nuclei are still separated by a large distance, the shapes of the galaxies in Arp 256 are impressively distorted. The galaxy in the upper part of the image contains very pronounced tidal tails—long, extended ribbons of gas, dust and stars. 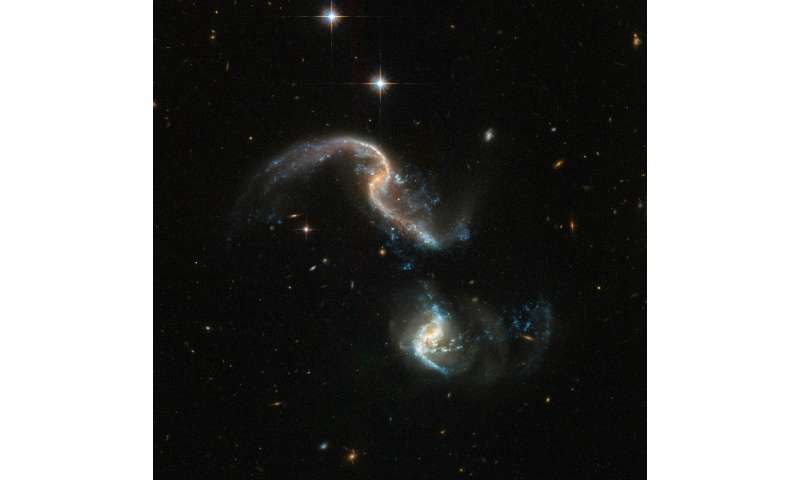 Arp 256 is a stunning system of two spiral galaxies, about 350 million light-years away, in an early stage of merging. The image, taken with the NASA/ESA Hubble Space Telescope, displays two galaxies with strongly distorted shapes and an astonishing number of blue knots of star formation that look like exploding fireworks. The star formation was triggered by the close interaction between the two galaxies.

This video zooms in on the two interacting spiral galaxies of the ARP 256 system, about 350 million light-years away.

It starts with a view of the night sky, focused on the constellation of Cetus (the Sea Monster), as seen from the ground. It then zooms through observations from the Digitized Sky Survey 2, and ends with a view of Arp 256 obtained with the NASA/ESA Hubble Space Telescope.

» A peculiar galactic clash
» Merging Galactic Gem
» Do you clash with certain starsigns?
» Peculiar "dog-bone" Asteroid
» Hubble spots a galaxy with a peculiar arm
Current date/time is Wed Sep 28, 2022 9:44 am