Data collected by NASA’s Juno mission to Jupiter indicate that the atmospheric winds of the gas-giant planet run deep into its atmosphere and last longer than similar atmospheric processes found here on Earth. The findings will improve understanding of Jupiter’s interior structure, core mass and, eventually, its origin.

Other Juno science results released today include that the massive cyclones that surround Jupiter’s north and south poles are enduring atmospheric features and unlike anything else encountered in our solar system. The findings are part of a four-article collection on Juno science results being published in the March 8 edition of the journal Nature.

“These astonishing science results are yet another example of Jupiter’s curve balls, and a testimony to the value of exploring the unknown from a new perspective with next-generation instruments.  Juno’s unique orbit and evolutionary high-precision radio science and infrared technologies enabled these paradigm-shifting discoveries,” said Scott Bolton, principal investigator of Juno from the Southwest Research Institute, San Antonio. “Juno is only about one third the way through its primary mission, and already we are seeing the beginnings of a new Jupiter.” 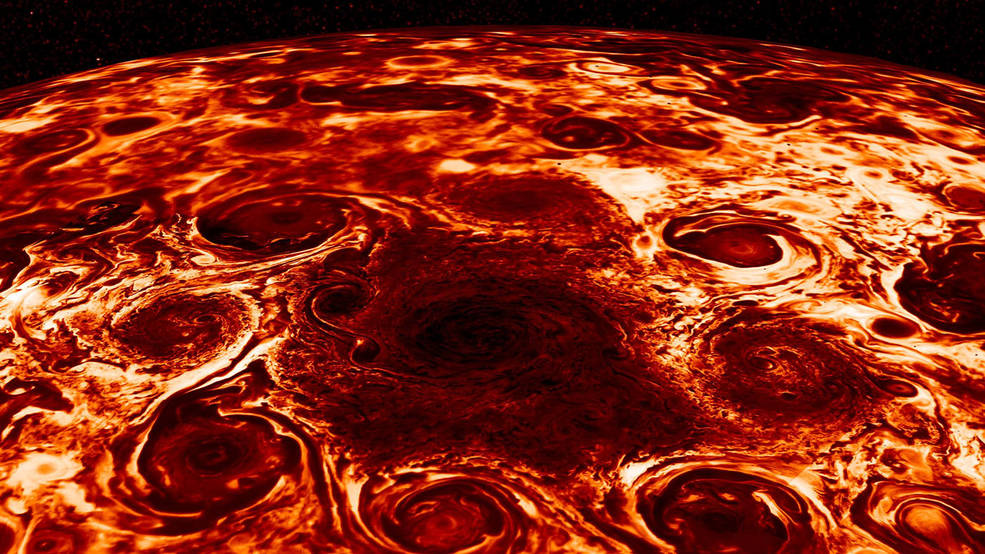 In this composite image, derived from data collected by the Jovian Infrared Auroral Mapper (JIRAM) instrument aboard NASA’s Juno mission to Jupiter, shows the central cyclone at the planet’s north pole and the eight cyclones that encircle it. 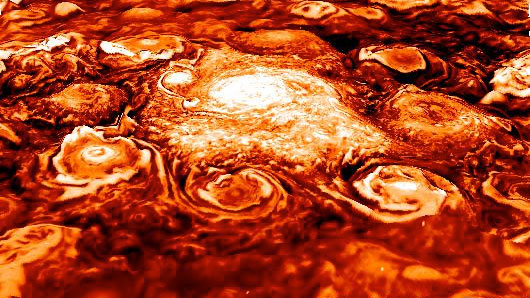 This computer-generated image is based on an infrared image of Jupiter’s north polar region that was acquired on February 2, 2017, by the Jovian Infrared Auroral Mapper (JIRAM) instrument aboard Juno during the spacecraft’s fourth pass over Jupiter 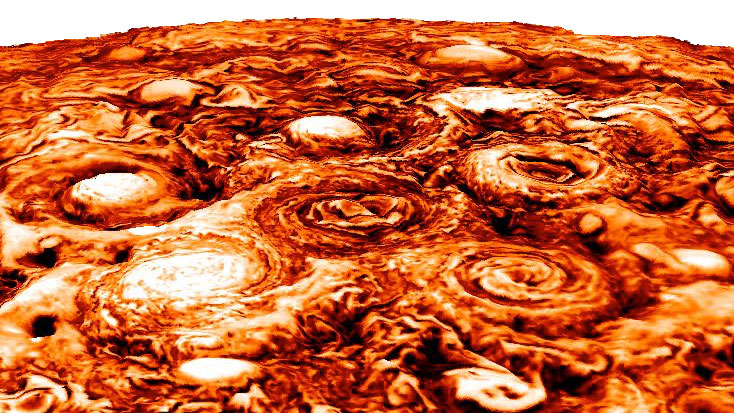 This computer-generated image shows the structure of the cyclonic pattern observed over Jupiter’s south pole. Like in the North, Jupiter’s south pole also contains a central cyclone, but it is surrounded by five cyclones with diameters ranging from 3,500 to 4,300 miles (5,600 to 7,000 kilometers) in diameter.

For hundreds of years, this gaseous giant planet appeared shrouded in colorful bands of clouds extending from dusk to dawn, referred to as zones and belts.

The bands were thought to be an expression of Jovian weather, related to winds blowing eastward and westward at different speeds.

This animation illustrates a recent discovery by Juno that demonstrates these east-west flows, also known as jet-streams penetrate deep into the planet's atmosphere, to a depth of about 1,900 miles (3,000 kilometers). Due to Jupiter's rapid rotation (Jupiter's day is about 10 hours), these flows extend into the interior parallel to Jupiter's axis of rotation, in the form of nested cylinders. Below this layer the flows decay, possibly slowed by Jupiter's strong magnetic field.

The depth of these flows surprised scientists who estimate the total mass involved in these jet streams to be about 1% of Jupiter's mass (Jupiter's mass is over 300 times that of Earth). This discovery was revealed by the unprecedented accuracy of Juno's measurements of the gravity field.

New movies of Jupiter are the first to catch an invisible wave shaking up one of the giant planet's jet streams, an interaction that also takes place in Earth's atmosphere and influences the weather.