The James Webb Space Telescope has peered through time and huge amounts of dust to capture a new image of the Cartwheel Galaxy, revealing the spinning ring of color in unprecedented clarity, NASA and the European Space Agency said Tuesday.

Located around 500 million light-years from Earth in the constellation Sculptor, the Cartwheel gained its shape during a spectacular head-on collision between two galaxies.

The impact sent two rings expanding from the galaxy's center, "like ripples in a pond after a stone is tossed into it", NASA and the ESA said in a joint statement.

A smaller white ring remains closer to the galaxy's center, while the outer ring, with its spokes of color, has been expanding into the universe for around 440 million years, the statement added.

As the outer ring expands it runs into gas, sparking the formation of new stars. 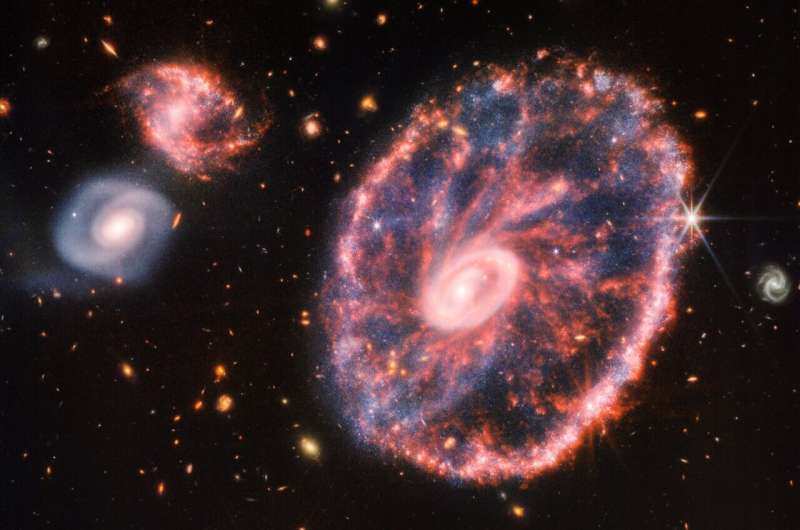 This image of the Cartwheel and its companion galaxies is a composite from Webb’s Near-Infrared Camera (NIRCam) and Mid-Infrared Instrument (MIRI), which reveals details that are difficult to see in the individual images alone.

This galaxy formed as the result of a high-speed collision that occurred about 400 million years ago.

The Cartwheel is composed of two rings, a bright inner ring and a colorful outer ring.

Both rings expand outward from the center of the collision like shockwaves.

However, despite the impact, much of the character of the large, spiral galaxy that existed before the collision remains, including its rotating arms. This leads to the “spokes” that inspired the name of the Cartwheel Galaxy, which are the bright red streaks seen between the inner and outer rings.

These brilliant red hues, located not only throughout the Cartwheel, but also the companion spiral galaxy at the top left, are caused by glowing, hydrocarbon-rich dust.

Amidst the red swirls of dust, there are many individual blue dots, which represent individual stars or pockets of star formation. 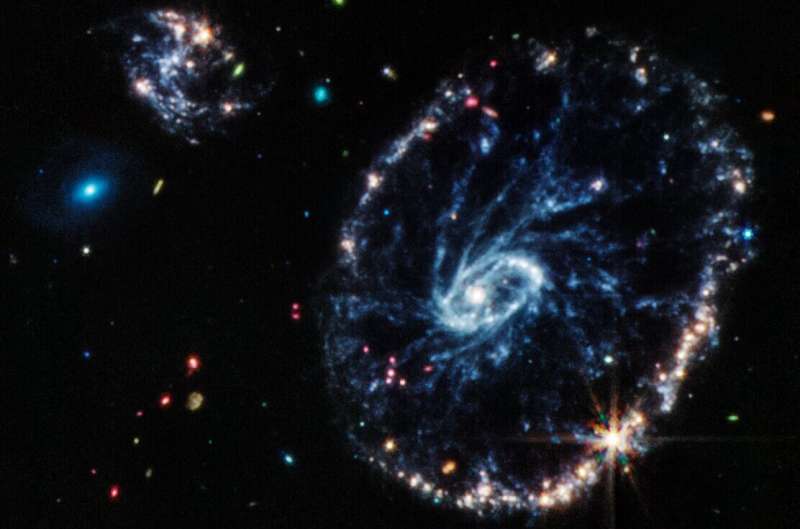 This image from Webb’s Mid-Infrared Instrument (MIRI) shows a group of galaxies, including a large distorted ring-shaped galaxy known as the Cartwheel.

The Cartwheel Galaxy, located 500 million light-years away in the Sculptor constellation, is composed of a bright inner ring and an active outer ring.

While this outer ring has a lot of star formation, the dusty area in between reveals many stars and star clusters.