Comets which consist of two parts, like Chury, can form after a catastrophic collision of larger bodies. Such collisions may have taken place in a later phase of our solar system, which suggests that Chury can be much younger than previously assumed. This is shown through computer simulations by an international research group with the participation of the University of Bern.

In the computer simulations, the research team investigated what happened after two large comet nuclei violently collided together. "The calculations showed that a large part of the material accumulates in many smaller bodies," explains Martin Jutzi of the Center for Space and Habitability (CSH) at the University of Bern and member of the National Centre of Competence in Research PlanetS. The newly created objects have different sizes and shapes, among them are many elongated bodies, some of which consist of two parts, just like the comet 67P/Churyumov-Gerasimenko, which the University of Bern studied in detail with the Bern mass spectrometer ROSINA on the Rosetta spacecraft. 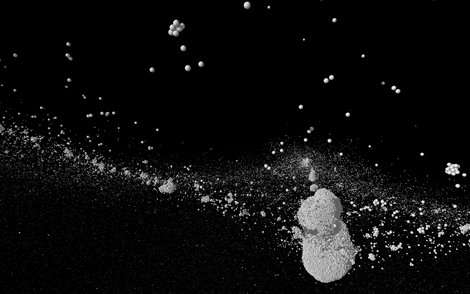 The final stage of a simulation, carried out by the authors, of a catastrophic collision between comets, showing one of the objects formed by re-accretion of debris from the collision, with a shape identical to that of Chury.

Catastrophic disruptions as the origin of bilobate comets.

Animation of Rosetta’s trajectory over the last two months of its mission at Comet 67P/Churyumov–Gerasimenko.

The animation begins in early August, when the spacecraft started flying elliptical orbits that brought it progressively closer to the comet at its closest approach.

On 24 September 2016, Rosetta will leave its current close, flyover orbits and transfer into the start of a 16 x 23 km orbit that will be used to prepare and line up for the final descent.

On the evening of 29 September (20:50 GMT) Rosetta will manoeuvre onto a collision course with the comet, beginning the descent from an altitude of 19 km. The spacecraft will fall freely, without further manoeuvres, collecting scientific data during the descent.

The trajectory shown here was created from real data provided over the last month, but may not necessarily follow the exact comet distance because of natural deviations from the comet’s gravity and outgassing.

» Baby Octopus Birth
» Astronomers witness birth of new star from stellar explosion
» Astronomers Witness Birth of Intermediate-Mass Black Hole
» Scientists dedicate the birth of a new black hole to Stephen Hawking
» Coming to a sky near you: Comet SWAN at its best
Current date/time is Fri May 20, 2022 1:56 am