Scientists have used lab experiments to retrace the chemical steps leading to the creation of complex hydrocarbons in space, showing pathways to forming 2-D carbon-based nanostructures in a mix of heated gases.

The latest study, which featured experiments at the Department of Energy's Lawrence Berkeley National Laboratory (Berkeley Lab), could help explain the presence of pyrene, which is a chemical compound known as a polycyclic aromatic hydrocarbon, and similar compounds in some meteorites.

A team of scientists, including researchers from Berkeley Lab and UC Berkeley, participated in the study, published March 5 in the Nature Astronomy journal. The study was led by scientists at the University of Hawaii at Manoa and also involved theoretical chemists at Florida International University.

"This is how we believe some of the first carbon-based structures evolved in the universe," said Musahid Ahmed, a scientist in Berkeley Lab's Chemical Sciences Division who joined other team members to perform experiments at Berkeley Lab's Advanced Light Source (ALS). 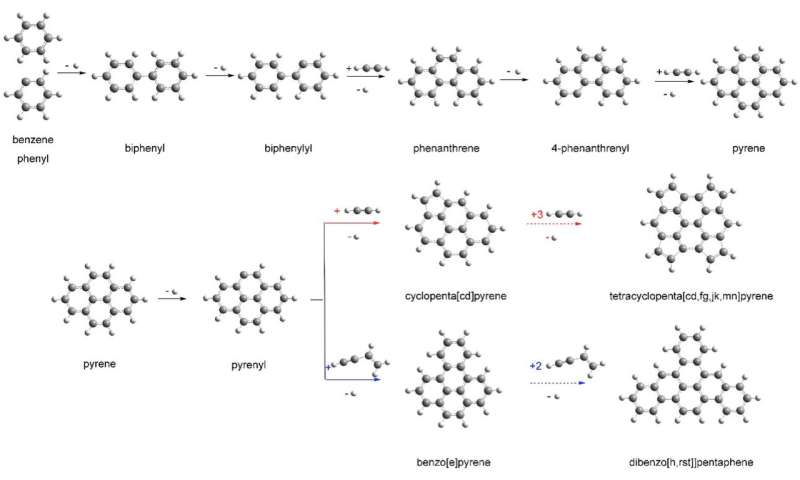 Reaction pathways that can form a hydrocarbon called pyrene through a chemical method known as hydrogen-abstraction/acetylene-addition, or HACA, is shown at the top. At bottom, some possible steps by which pyrene can form more complex hydrocarbons via HACA (red) or another mechanism (blue) called hydrogen abstraction -- vinylacetylene addition (HAVA).

Two wayward space rocks, which separately crashed to Earth in 1998 after circulating in our solar system's asteroid belt for billions of years, share something else in common: the ingredients for life. They are the first meteorites found to contain both liquid water and a mix of complex organic compounds such as hydrocarbons and amino acids.

A detailed study of the chemical makeup within tiny blue and purple salt crystals sampled from these meteorites, which included results from X-ray experiments at the Department of Energy's Lawrence Berkeley National Laboratory (Berkeley Lab), also found evidence for the pair's past intermingling and likely parents. These include Ceres, a dwarf planet that is the largest object in the asteroid belt, and the asteroid Hebe, a major source of meteorites that fall on Earth.

» Chemical Gardens in Space
» Paucity of phosphorus hints at precarious path for extraterrestrial life
» What led you to your spiritual path?
» Fire Burns Differently in Space, Space Station Experiment Shows
» Stars might be forming much faster than expected
Current date/time is Wed May 18, 2022 5:35 pm