A new image from the MeerKAT telescope at the South African Radio Astronomy Observatory (SARAO) in Cape Town, South Africa, shows radio emission from numerous phenomena, including outbursting stars, stellar nurseries, and the chaotic region around Sagittarius A*, the 4.3-million-solar-mass black hole that lurks in the center of our Milky Way Galaxy, 25,000 light-years from Earth.

“The inner 652-light-year region of the Galaxy contains a supermassive black hole, significant quantities of molecular gas, and star formation and cosmic ray energy densities that are roughly two orders of magnitude higher than the corresponding levels in the Galactic disk,” said Dr. Ian Heywood from the University of Oxford, Rhodes University, and SARAO, and his colleagues. 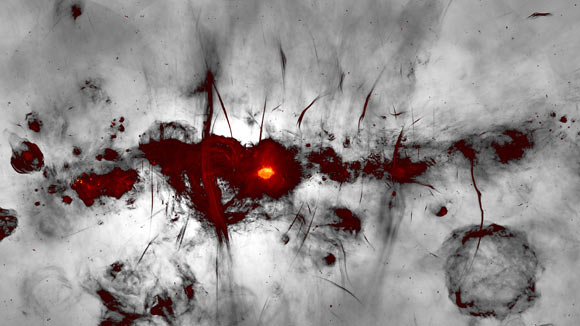 The new MeerKAT image of the Milky Way’s center is shown with the Galactic plane running horizontally across the image.

Many new and previously-known radio features are evident, including supernova remnants, compact star-forming regions, and the large population of mysterious radio filaments.

The broad feature running vertically through the image is the inner part of the radio bubbles, spanning 1,400 light-years across the center of the Galaxy. 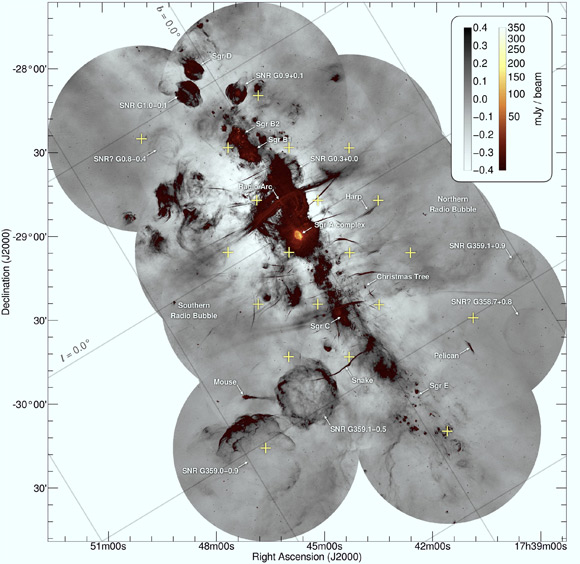 The full MeerKAT total intensity mosaic, covering 6.5 square degrees of the Galactic center region at an angular resolution of 4 sec. 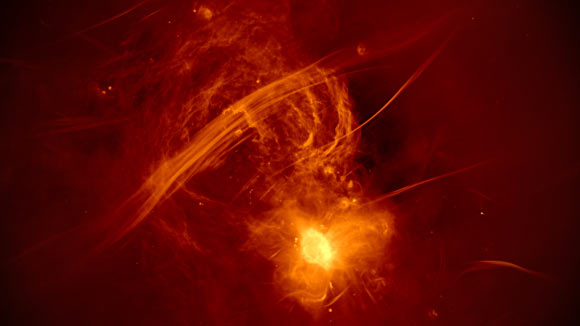 This is traversed by the Radio Arc, a complex of many parallel radio filaments. The radio bubble nestles against the diffuse Sagittarius A region in the lower center of the image.

The bright dot near the center of this region is Sagittarius A*.

A new panorama from NASA's Chandra X-ray Observatory and the MeerKAT radio telescope provides a stunning view of the center of our Milky Way galaxy.

It also reveals threads of superheated gas and magnetic fields, which are weaving a tapestry of energy near the supermassive black hole that resides there.
_________________