“The three galaxies are individually referred to as NGC 7764A1, NGC 7764A2 and NGC 7764A3, and just to be really difficult, an entirely separate galaxy, named NGC 7764, sits in the skies about a Moon’s distance (as seen from Earth) away.”

“This naming makes more sense when we consider that many of the catalogues for keeping track of celestial bodies were compiled well over 100 years ago, long before modern technology made standardizing scientific terminology much easier.”

“As it is, many astronomical objects have several different names, or might have names that are so similar to other objects’ names that they cause confusion.”

NGC 7764A is located approximately 425 million light-years away in the constellation of Phoenix. 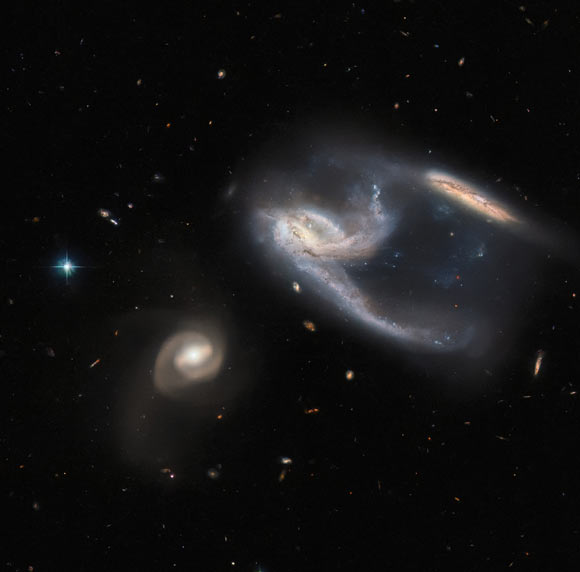 This image shows NGC 7764A, a group of three galaxies located 425 million light-years away in the constellation of Phoenix.

The color image is made up of observations from Hubble’s Advanced Camera for Surveys (ACS) and the Dark Energy Camera (DECam) on the Victor M. Blanco 4-m Telescope in the near-infrared and optical parts of the spectrum.