Mimas, the smallest and innermost of Saturn’s eight main moons, may be warm enough to harbor a global, liquid water ocean beneath a 24-31-km (15-19-mile) thick ice shell, according to a new analysis of data from NASA’s Cassini mission.

One of the most profound discoveries in planetary science over the past 25 years is that worlds with oceans beneath layers of rock and ice are common in our Solar System.

Such worlds include the icy satellites of the giant planets, such as Europa, Titan and Enceladus, as well as distant planets like Pluto.

Worlds like Earth with surface oceans must reside within a narrow range of distances from their stars to maintain the temperatures that support liquid oceans.

Interior water ocean worlds, however, are found over a much wider range of distances, greatly expanding the number of habitable worlds likely to exist across the galaxy. 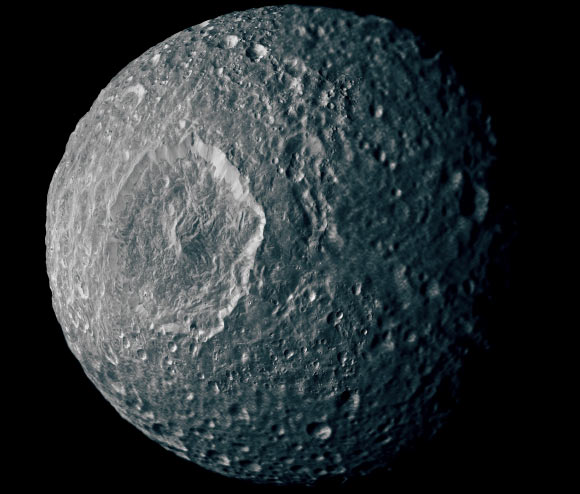 Mimas’ surface, like the surfaces of most of the other major Saturnian moons without atmospheres, is not pure ice but contains some dark impurities; the relatively dark markings appear along the lower portion of the walls of the 130-km-wide Herschel Crater (the peak in the middle of the crater is about as tall as Mount Everest; the impact that made it likely almost destroyed the moon) and some of the smaller craters; scientists interpret this darkening as evidence for the gradual concentration of impurities from evaporating icy materials in areas where the dark impurities slide slowly down the crater wall.