First described in 1902 by the German zoologist Ernst Vanhöffen, it is widespread throughout the oceans.

Crossota species tend to be solitary and pelagic in nature.

Although they may be found near the bottom as well, down to depths of 4,000 m, they have not been observed resting on the bottom.

They have red coloration, a hemispherical bell, eight tubular or pendant gonads, tentacles in single or multiple rows.

They swim with a series of strong pulsing contractions, usually followed by a period of quiescence. 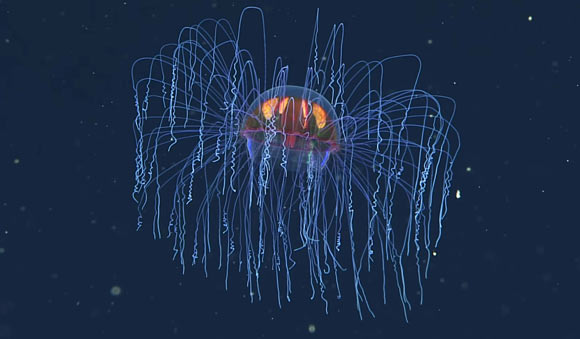 Crossota millsae is one of the most colorful residents of the ocean’s midnight zone.

This jelly is one of the most colorful residents of the ocean’s midnight zone.

The remarkable coloration of this jelly tipped off scientists that they had found a previously unknown species.

It was named in honor of Claudia Mills for her dedication to studying the ocean’s delicate drifters.