A stellar system with three super-Earths

A stellar system with three super-Earths

Over 3500 extra-solar planets have been confirmed to date. Most of them were discovered using the transit method, and astronomers can combine the transit light curves with velocity wobble observations to determine the planet's mass and radius, and thereby constrain its interior structure. The atmosphere can also be studied in a transit by using the fact that the chemical composition of the atmosphere means its opacity varies with wavelength. By measuring the depth of the transit at different wavelengths, it is possible to infer the composition and temperature of the planet's atmosphere. 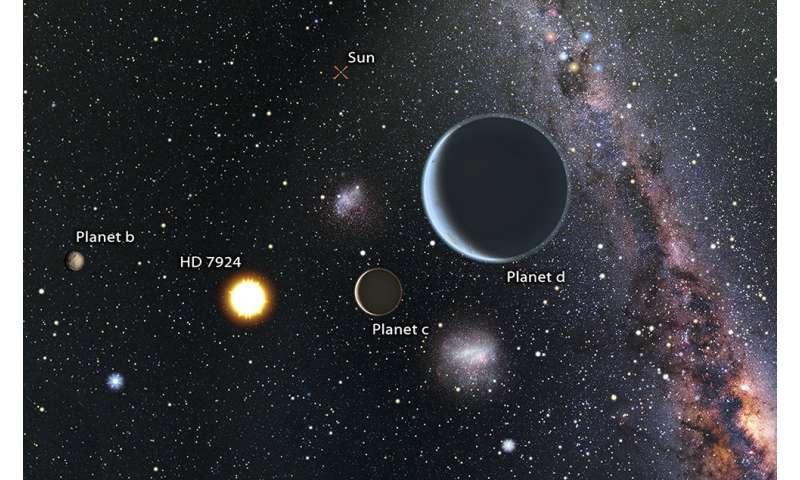 An artist's conception of an exoplanetary system, in this case around the star HD7924, that hosts two super-Earths (objects c and d in the image). Astronomers have discovered a star with three super-Earths that transit, making them prime candidates for detailed atmospheric studies.

A team of researchers led by Enrique Diez Alonso of the University of Oviedo, Spain, reports the finding of three new exoplanets from the data acquired by the K2 mission.

The Kepler spacecraft observed the star LP415-17 between March and May 2017, during its Campaign 13. These observations allowed the team to discover that this star is orbited by three exoworlds. The newly detected planets were classified as super-Earths, as they have masses higher than Earth's but lower than that of solar system's gas giants.

Located some 267 light years away from the Earth, LP415-17 is a star of spectral type K with a radius of about 0.58 solar radii and approximately 35 less massive than our sun. It has an effective temperature of 4,258 K and was therefore classified as a cool dwarf.

According to the study, LP415-17 b, with a radius of about 1.8 Earth radii, is the smallest planet of the newly discovered trio. It has a mass of 4.7 Earth masses and orbits its parent star every 6.34 days at a distance of 0.056 AU from the host. The planet has an equilibrium temperature of 708 K.

LP415-17 c is the largest and most massive planet in the system – it is 6.5 times as massive as the Earth and has a radius of approximately 2.6 Earth radii. At a distance of nearly 0.1 AU from the host, it has an equilibrium temperature of 583 K and an orbital period of 13.85 days.

LP415-17 d has a radius of 1.9 Earth radii and is almost five times as massive as our planet. The exoworld has a semi-major axis of about 0.19 AU and it takes it 40.7 days to fully orbit its host star. The planet's equilibrium temperature is 381 K.