he closest star to Earth is a triple-star system called Alpha Centauri.

They are about 4.35 light-years from Earth, according to NASA.

The third star is called Proxima Centauri or Alpha Centauri C, and it is about 4.25 light-years from Earth, making it the closest star other than the sun.

According to NASA, Alpha Centauri A and B are on average about 23 astronomical units (AU) from each other — a little more than the distance between the sun and Uranus.

The closest the two stars ever come to each other is 11 astronomical units, according to NASA, and the two stars orbit a common center of gravity every 80 years. 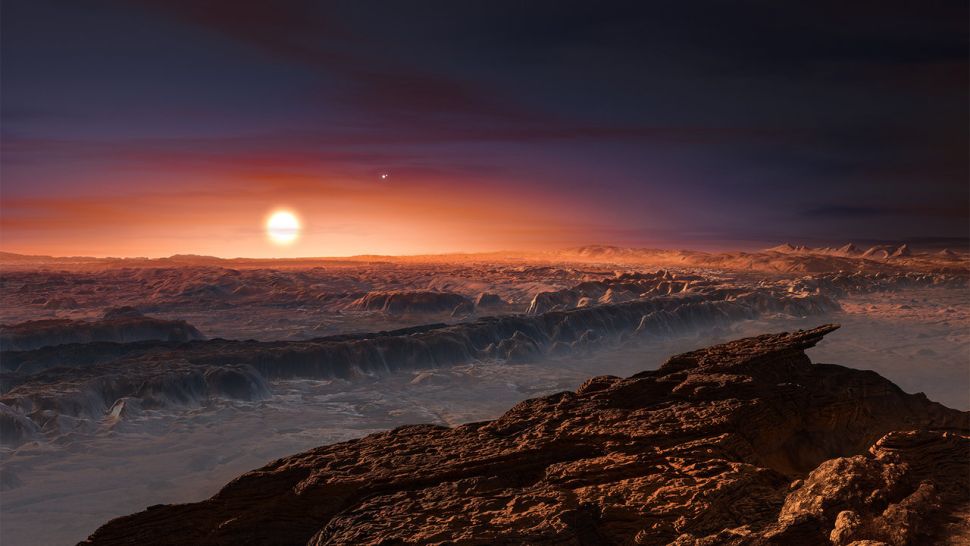 An artist's depiction of the view from the surface of Proxima b, with the two stars of Alpha Centauri visible low in the skies.

Astronomers working from the European Southern Observatory in Chile have discovered a planet slightly more massive than Earth, orbiting a star in the Alpha Centauri triple star system -- the nearest stellar system to our planet.
_________________

» Possible discovery of a new super-Earth orbiting Proxima Centauri
» Astronomers discover closest black hole to Earth
» Saturn and Mars Team Up to Make Their Closest Approaches to Earth in 2018
» Life in these star-systems could have spotted Earth
» Astronomers discover super-Earth around Barnard's star
Current date/time is Mon May 16, 2022 5:52 am