It’s hard to believe, but there was once a time when the rich and powerful spent small fortunes on radium-infused distilled water advertised as a cure for a variety of illnesses.

Knowing what we know now about radioactive elements and their effects on the human body, most of us wouldn’t dare touch, let alone drink, a bottle of radium-containing water, but at the beginning of the twentieth century, the so-called “remedy” was all the rage among wealthy socialites.

Radithor and other radioactive elixirs were sold as harmless remedies that could combat fatigue, and cure all sorts of conditions, from cancers to impotence.

Unfortunately, in reality, they slowly killed the very people they were supposed to heal.

Radithor, which was distilled water containing two radioactive substances, radium and mesothorium, is probably the most famous example of radioactive quackery, most likely because it’s also the only one that can be unambiguously linked to someone’s death.

It was sold in small 2 oz bottles and was guaranteed to contain at least 1 microcurie each of Ra-226 and Ra-228.

Byers was buried in a lead-lined coffin; when exhumed in 1965 for study, his remains were still highly radioactive and measured at 225,000 becquerels.

As a comparison, the roughly 0.0169 g of potassium-40 present in a typical human body produces approximately 4,400 becquerels.

Byers's death led to the strengthening of the Food and Drug Administration's powers and the demise of most radiation-based patent medicines.

A Wall Street Journal article (1 Aug. 1990) describing the Byers incident was titled "The Radium Water Worked Fine Until His Jaw Came Off" 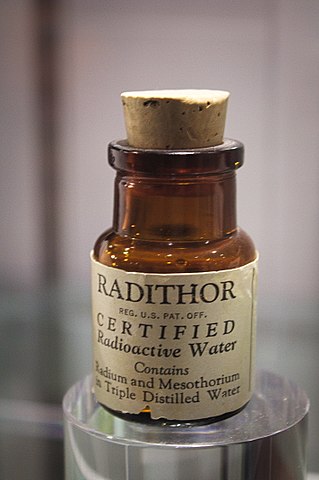 By Sam LaRussa from United States of America

A bottle of Radithor at the National Museum of Nuclear Science & History in New Mexico, United States.