NASA Finds a Large Amount of Water in an Exoplanet's Atmosphere

NASA Finds a Large Amount of Water in an Exoplanet's Atmosphere

Much like detectives study fingerprints to identify the culprit, scientists used NASA’s Hubble and Spitzer space telescopes to find the “fingerprints” of water in the atmosphere of a hot, bloated, Saturn-mass exoplanet some 700 light-years away. And, they found a lot of water. In fact, the planet, known as WASP-39b, has three times as much water as Saturn does.

Though no planet like this resides in our solar system, WASP-39b can provide new insights into how and where planets form around a star, say researchers. This exoplanet is so unique, it underscores the fact that the more astronomers learn about the complexity of other worlds, the more there is to learn about their origins. This latest observation is a significant step toward characterizing these worlds. 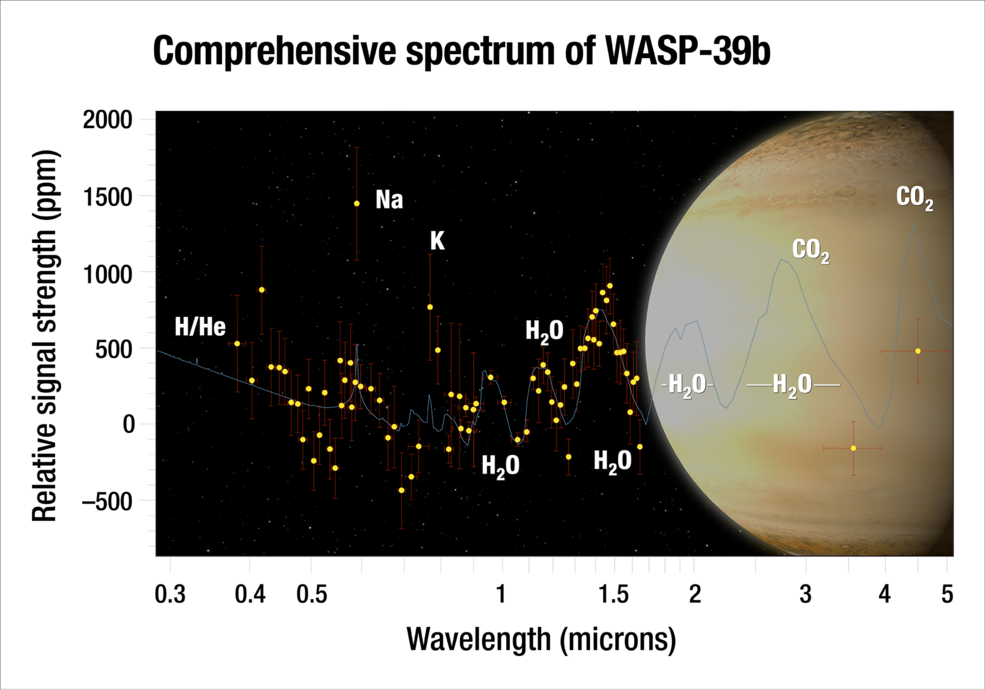 Using Hubble and Spitzer, astronomers analyzed the atmosphere of the "hot Saturn" exoplanet WASP-39b, and they captured the most complete spectrum of an exoplanet's atmosphere possible with present-day technology. By dissecting starlight filtering through the planet's atmosphere into its component colors, the team found clear evidence for water vapor. Although the researchers predicted they would see water, they were surprised by how much water they found - three times as much water as Saturn has. This suggests that the planet formed farther out from the star, where it was bombarded by icy material.

There is almost no information about the colors of the planets available, with the exception of HD 189733b, which became known as the "blue planet."

The hottest planets within the sample are portrayed with a glowing night side. This effect is strongest on WASP-12b, the hottest exoplanet in the sample, but also visible on WASP-19b and WASP-17b.

It is also known that several of the planets exhibit strong Rayleigh scattering. This effect causes the blue hue of the daytime sky and the reddening of the Sun at sunset on Earth. It is also visible as a blue edge on the planets WASP-6b, HD 189733b, HAT-P-12b, and HD 209458b.

The wind patterns shown on these ten planets, which resemble the visible structures on Jupiter, are based on theoretical models. The video also demonstrates the relative wind speeds expected on these hot Jupiters.

» Astronomers detect large amounts of oxygen in ancient star's atmosphere
» eROSITA finds large-scale bubbles in the halo of the Milky Way
» First Evidence of Water Vapor in the Atmosphere of Jupiter’s Moon Ganymede
» NASA rocket chasing the source of the sun's hot atmosphere
» NASA Enters the Solar Atmosphere for the First Time
Current date/time is Fri May 20, 2022 1:20 am