Gazing into the universe is like looking into a funhouse mirror. That's because gravity warps the fabric of space, creating optical illusions.

Many of these optical illusions appear when a distant galaxy's light is magnified, stretched, and brightened as it passes through a massive galaxy or galaxy cluster in front of it.

This phenomenon allows astronomers to study galaxies so distant they cannot be seen other than by the effects of gravitational lensing. 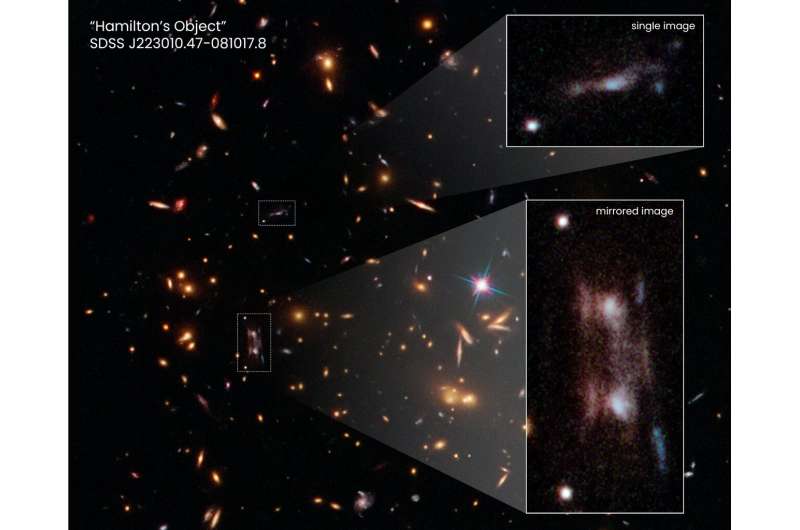 This Hubble Space Telescope snapshot shows three magnified images of a distant galaxy embedded in a cluster of galaxies.

These images are produced by a trick of nature called gravitational lensing.

The galaxy cluster's immense gravity magnifies and distorts the light from the distant galaxy behind it, creating the multiple images.

The galaxy cluster, catalogued as SDSS J223010.47-081017.8, is 7 billion light-years from Earth.
Hubble has observed many gravitationally lensed galaxies.

However, the images spotted in this Hubble snapshot are unique.

Two of the magnified images, shown in the pull-out at bottom right, are exact copies of each other. The two bright ovals are the cores of the galaxy.

This rare phenomenon occurs because the background galaxy straddles a ripple in the fabric of space.

This “ripple” is an area of greatest magnification, caused by the gravity of dense amounts of dark matter, the unseen glue that makes up most of the universe's mass.

As light from the faraway galaxy passes through the cluster along this ripple, two mirror images are produced, along with a third image that can be seen off to the side.

A close-up of the third image is shown in the pull-out at top right.

This image most closely resembles the remote galaxy, which is located more than 11 billion light-years away.

Based on a reconstruction of this image, the researchers determined that the distant galaxy appears to an edge-on, barred spiral with ongoing, clumpy star formation.

The mirror images are named “Hamilton’s Object" for the astronomer who discovered them. 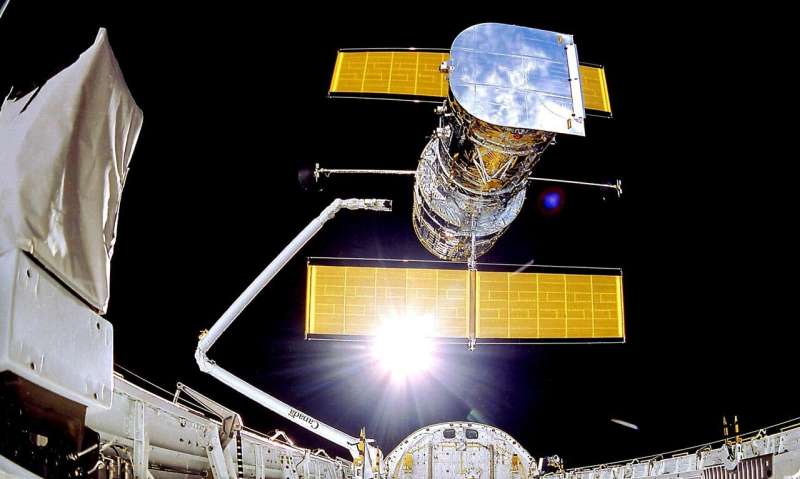 The Hubble Space Telescope is deployed on April 25, 1990 from the space shuttle Discovery.

Avoiding distortions of the atmosphere, Hubble has an unobstructed view peering to planets, stars and galaxies, some more than 13.4 billion light years away.

Scientists have discovered a completely new galaxy thanks to a peculiar double object that appeared to be an exact reflection of the same galaxy and its quirky companion, which had perplexed them for years.

The three objects are distorted pictures of the same distant galaxy, which is 11 billion light-years away from Earth.

The cosmic optical illusion has supplied scientists with a rare example of a galaxy’s alignment with Earth being so accurate that it causes three perfect replicas of the same distant object, in addition to allowing the discovery of a new distant galaxy.

Hamilton’s Object is named for Timothy Hamilton, an astronomer at Shawnee State University in Portsmouth, Ohio, who discovered the reflected pictures.


NASA’s Hubble Space Telescope Hamilton discovered two bright images that looked to be an identical reflection of one other while investigating the centres of active galaxies, called as quasars.

Two identical galactic bulges, a thick clump of stars seen in the core of some galaxies, looked to constitute the bizarre double object.

A third weird image was discovered nearby, in cosmic terms, in addition to this strange reflection.

For years, academics have been perplexed by the galactic bulge reflection and its strange partner, with numerous explanations proposed but failing to explain the arrangement.
_________________