Located in the southern constellation of Fornax, GAL-CLUS-022058-38303 is a so-called Einstein ring — a distorted image of a gravitationally lensed distant galaxy.

In December 2020, the Hubble team released the image of the object as an example of one of the largest, nearly complete Einstein rings ever seen.

GAL-CLUS-022058-38303 was nicknamed the ‘Molten Ring’ by the Hubble astronomers, which alludes to its appearance and host constellation.

Using data from Hubble and the FORS instrument on ESO’s Very Large Telescope, astronomers have now studied GAL-CLUS-022058-38303 in detail. 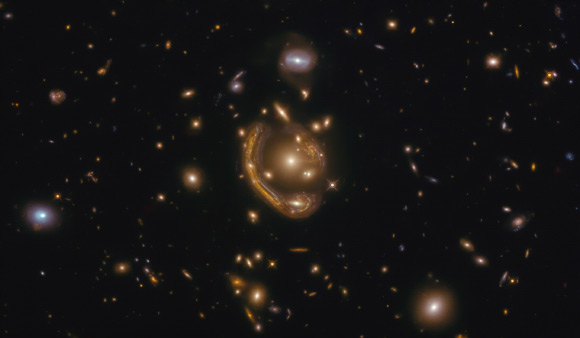 The image is made up of observations from Hubble’s Wide Field Camera 3 (WFC3) in the infrared and optical parts of the spectrum.

The color results from assigning different hues to each monochromatic image associated with an individual filter.

This observation has since been used to develop a lensing model to study the physical properties of the lensed galaxy.
_________________

For the past 31 years, the Hubble Space Telescope has continued its important mission of uncovering the mysteries of the universe.

One of those mysteries that Hubble has helped us begin to understand is gravitational lensing.
_________________