On July 14, 2021, the Subaru-Asahi Sky Camera on the 8.2-m Subaru Telescope at the summit of Maunakea, Hawai’i, captured a rare meteor outburst associated with a so-called meteoroid cluster.

A meteoroid cluster is thought to be caused by meteoric material breaking up into smaller pieces shortly before entering Earth’s atmosphere.

Only a few cases have been reported since this phenomenon was first identified during the Leonid meteor shower in 1997.

“The scientific importance of capturing such a rare phenomenon is extremely great, and it is especially significant because the overall duration of the event was longer than in previous cases,” said Professor Junichi Watanabe, vice-director of the National Astronomical Observatory of Japan. 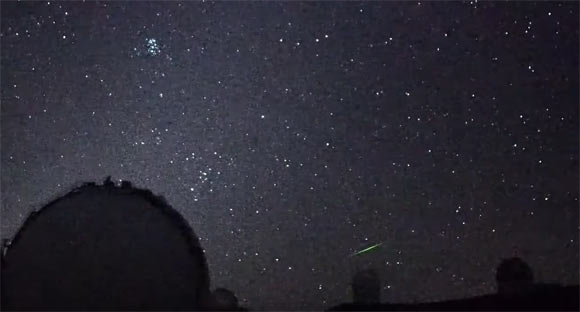 On July 14, 2021, the Subaru Telescope captured more than a dozen meteors streaming from the same direction within a 10-second window.