Thanks to the presence of a gravitational lens, the NASA/ESA Hubble Space Telescope has captured five separate images of 2M1310-1714, a quasar located approximately 17 billion light-years away in the constellation of Virgo.

Albert Einstein predicted in his theory of general relativity that massive objects will deform the fabric of space itself.

When light passes one of these objects, such as massive galaxies or their groups, its path is changed slightly.

Called gravitational lensing, this effect is only visible in rare cases and only world’s best telescopes can observe the related phenomena.

“The central pair of galaxies in this image are genuinely two separate galaxies, which are located 3.8 billion light-years from Earth,” Hubble astronomers said.

“The four bright points circling them, and the fainter one in the very center, are actually five separate images of a single quasar, known as 2M1310-1714, an extremely luminous but distant object.” 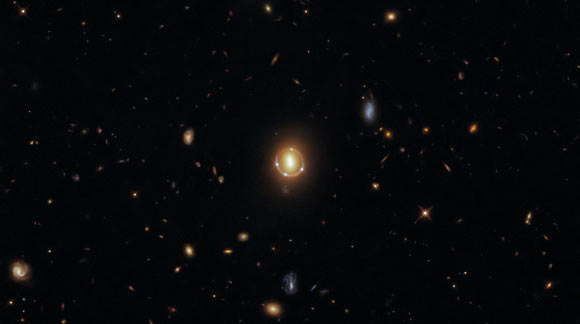 The color image is made up of observations from Hubble’s Wide Field Camera 3 (WFC3) in the infrared and optical parts of the spectrum. 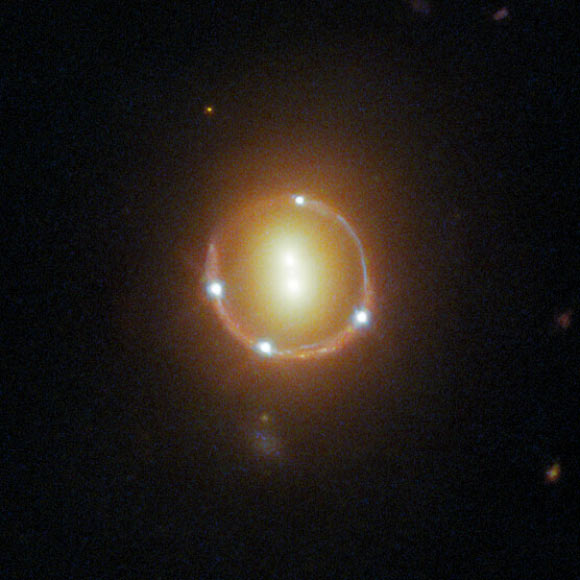 An Einstein ring formed by gravitationally lensed light from 2M1310-1714.

A Tour of Lensed Quasars

Like whirlpools in the ocean, spinning black holes in space create a swirling torrent around them.

However, black holes do not create eddies of wind or water. Rather, they generate disks of gas and dust heated to hundreds of millions of degrees that glow in X-ray light.
_________________

When a cluster of galaxies lies along our line of sight, the light from a faraway galaxy behind can be magnified.