Solar Orbiter and BepiColombo are set to make space history with two Venus flybys just 33 hours apart on 9 and 10 August.

The two spacecraft need the gravitational swingby to help them lose a little orbital energy in order to reach their destinations towards the center of the Solar System.

The double flyby also offers an unprecedented opportunity to study the Venus environment from different locations at same time and, moreover, in locations that are not typically visited by a dedicated planetary orbiter. 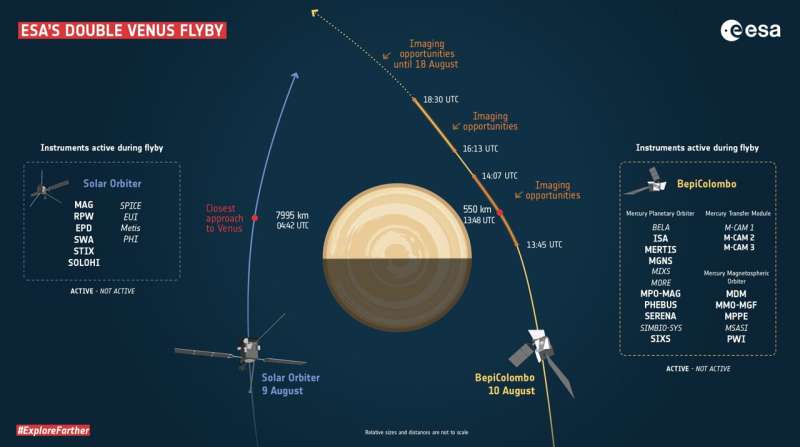 Key moments during Solar Orbiter and BepiColombo’s flyby of Venus within 33 hours of each other on 9 and 10 August 2021, respectively.

While many of the in situ instruments will be on and collecting data as usual, of particular note is the activation of two of BepiColombo’s three monitoring cameras, which will aim to capture Venus during the flyby and in the days after.

The images are not downloaded immediately; it is expected that the first images will be available at the end of the day on 10 August and into 11 August.

There is also a potential imaging opportunity for the SoloHI instrument on Solar Orbiter in the week leading up to the flyby.

Solar Orbiter’s path around the Sun has been chosen to be ‘in resonance’ with Venus, which means that it will return to the planet’s vicinity every few orbits and can again use the planet’s gravity to alter or tilt its orbit.

Initially Solar Orbiter will be confined to the same plane as the planets, but each encounter of Venus will increase its orbital inclination.

By 2025 it will make its first solar pass at 17º inclination, increasing to 33º by the end of the decade, bringing even more of the polar regions into direct view.

This will result in the spacecraft being able to take the first ever images of the Sun’s polar regions, crucial for understanding how the Sun ‘works’, for investigating the Sun-Earth connection and how we can better predict periods of stormy space weather.
_________________

Visualisation of BepiColombo flying by Venus on 10 August 2021.

The spacecraft makes nine gravity assist maneouvres (one of Earth, two of Venus and six of Mercury) before entering orbit around the innermost planet of the Solar System.
_________________