“Theories of planetary migration abound but can broadly be categorized as disk-driven migration, caused by torques from the protoplanetary disk, or high-eccentricity migration, whereby a giant planet exchanges orbital energy and angular momentum with one or more other objects in its system and subsequently experiences tidal circularization during close periastron passages.”

“The characterization of giant planets and their orbits offers a window into which mechanisms might have been at play.” 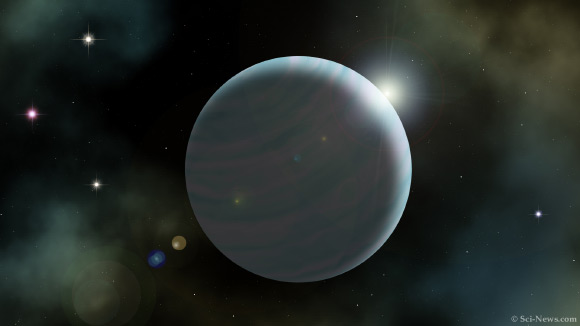 An artist’s impression of the giant exoplanet Kepler-1704b.

The newfound giant planet, labeled Kepler-1704b, has a mass of 4.15 times that of Jupiter.

The alien world orbits its host star once every 989 days in an extremely eccentric orbit (e=0.92).

“Kepler-1704b is a failed hot Jupiter that was likely excited to high eccentricity by scattering events that possibly began during its gas accretion phase,” the astronomers said.

There's a huge amount of variety among exoplanets – planets outside our solar system.

There are water worlds, lava planets, egg-shaped worlds, planets with multiple suns, and even planets with no sun at all!

What can we learn from all this weird, wondrous variety?