These findings combine computer simulations with data from recent exoplanet findings, as well as X-ray and ultraviolet observations of stars and black holes.

"It's pretty wild to think of black holes shaping the evolutionary destiny of a planet, but that very well may be the case in the center of our galaxy," said Howard Chen of Northwestern University in Illinois, who led the study.

Chen and collaborators from the Harvard-Smithsonian Center for Astrophysics (CfA) examined the environment around the closest supermassive black hole to Earth: the 4 million solar mass black hole known as Sagittarius A*.

It is well known that material falling into the black hole in occasional feeding frenzies will generate bright flares of X-ray and ultraviolet radiation. Indeed, X-ray telescopes such as NASA's Chandra X-ray Observatory and ESA's XMM-Newton have seen evidence for bright outbursts generated in the past, ranging from about 6 million years to just over a century ago. 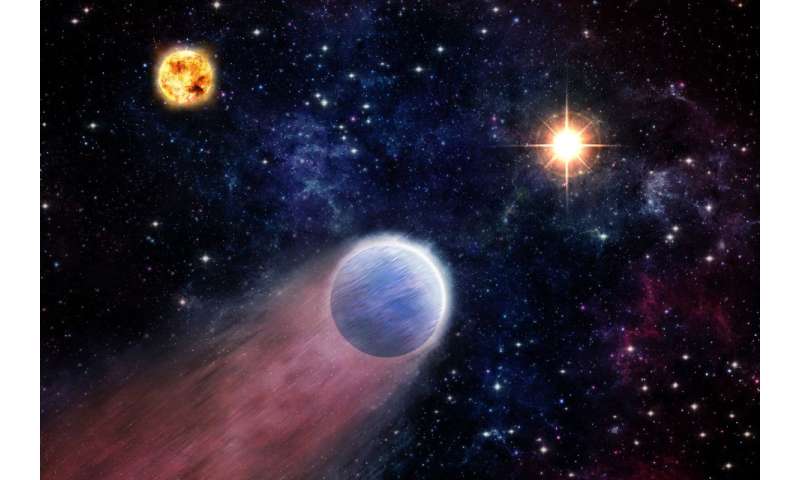 A team of astrophysicists and planetary scientists has predicted that Neptune-like planets located near the center of the Milky Way were transformed into rocky planets by outbursts generated by the nearby supermassive black hole.

Researchers have found evidence that the normally dim region very close to the supermassive black hole at the center of the Milky Way galaxy flared up with at least two bright outbursts in the past few hundred years. These images are from a study of Chandra observations taken over twelve years that show rapid variations in the X-ray emission from gas clouds surrounding the supermassive black hole.

The phenomenon, known as a "light echo," provides astronomers an opportunity to piece together what objects like Sgr A* were doing long before there were X-ray telescopes to observe them. (NASA/CXC/A. Hobart)

On March 28, 2011, NASA's Swift satellite detected X-rays produced by a black hole that devoured a star, roughly 3.9 billion years ago.

Using a technique called X-ray reverberation mapping on the data has revealed a map of the black holes disk that formed as a result.

Over several years, astronomers have noticed flares in X-ray light from the black hole at the center of the Milky Way. NASA's Chandra X-ray Observatory detected these flares during the telescope's periodic observations of the black hole.

A new study suggests that these flares may occur when the black hole - known as Sagittarrius A* or Sgr A* for short -- consumes an asteroid at least six miles wide. If an asteroid gets too close to another object like a star or planet, it can be thrown into an orbit headed toward Sgr A*.

Once the asteroid passes within about 100 million miles of the black hole, it is torn into pieces by the black hole's tidal forces.

Eventually, these fragments are vaporized by friction as they pass through the hot, thin gas flowing onto Sgr A*.

This is what produces an X-ray flare. If confirmed, this result could mean that there is a cloud around Sgr A* containing trillions of asteroids and comets.