Comet Bernardinelli-Bernstein is named after two University of Pennsylvania astronomers, Pedro Bernardinelli and Professor Gary Bernstein, who spotted it in archival images from the Dark Energy Survey.

Comet Bernardinelli-Bernstein is not expected to become naked-eye bright: it will remain a telescopic object because its closest distance to the Sun will still be beyond Saturn. It will reach its closest approach to the Sun in January 2031. 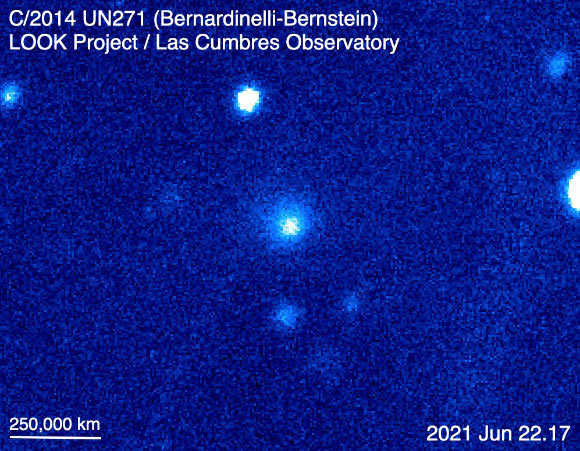 This image of comet C/2014 UN271 (Bernardinelli-Bernstein) was taken by the Las Cumbres Observatory 1-m telescope at Sutherland, South Africa, on June 22, 2021; the diffuse cloud is the comet’s coma.

Comet Bernardinelli-Bernstein (precisely in the center) is estimated to be about 1000 times more massive than a typical comet, making it arguably the largest comet discovered in modern times.

It has an extremely elongated orbit, journeying inward from the distant Oort Cloud over millions of years. It is the most distant comet to be discovered on its incoming path.
_________________